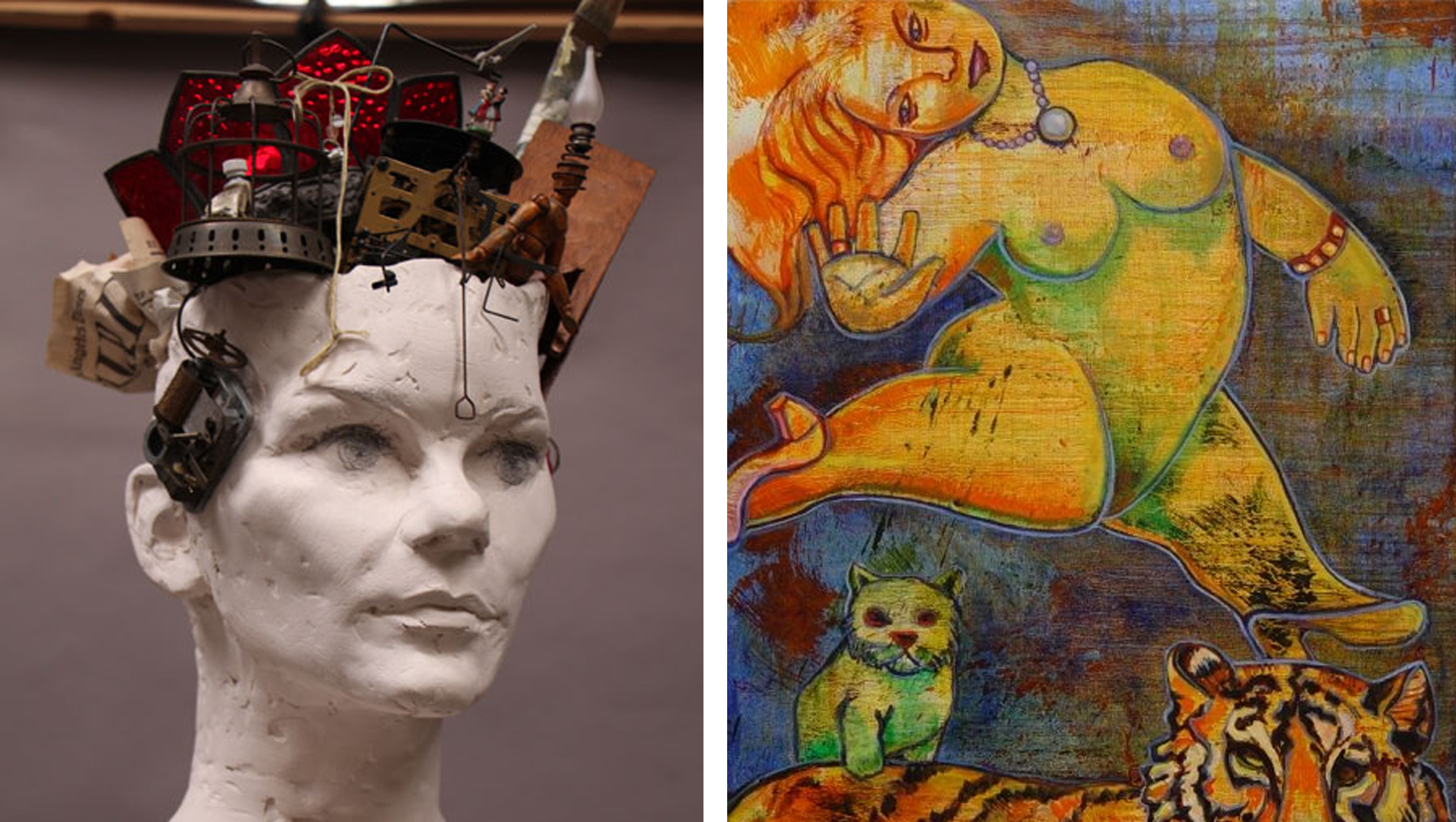 Treasures are found everywhere in the part of Los Angeles known as San Pedro.

The tide pools, at the bottom of the rocky cliffs and hidden inlets, provide endless adventure for treasure hunters. Sunsets viewed from the top of Angels Gate Park can guide you to a state of bliss.

But local residents also realize that some of the most valuable treasures found in San Pedro are our internationally renowned artists. Beginning April 3, the venerable Loft Gallery presents a new exhibition featuring two of our most treasured artists, Muriel Olguin and Eugene Daub.

The show is an inspired pairing of two completely dissimilar artists. Each of the artists has brought note and honor to San Pedro. Each has received attention and accolades from across the nation for their work.

Most recently, Daub distinguished himself as the only San Pedro artist to have a work of art in the statuary hall of the Congress. His noble statue of Rosa Parks was the first to be commissioned for Congress since the statue of Ulysses S. Grant in 1922.

Muriel Olguin is known as the matriarch of the San Pedro arts. The 90-year-old artist creates fantastical figurative work of animals that reflect her connection to the earth and the ocean, which she developed during her rich life in San Pedro.

Olguin was a founding member of Angels Gate Cultural Center.  The San Pedro High School: John M. and Muriel Olguin Campus was named after Muriel Olguin and her husband John, director emeritus of Cabrillo Marine Museum. Muriel taught at Pepperdine University, where she earned a lifetime achievement award.  Her paintings have been exhibited in Europe and Asia, as well as in numerous galleries and museums in Southern California.  She is known and loved for both her art and her community work.

Daub plans to display a combination of work from past commissions. He will show reliefs and maquettes that were created for the Rosa Parks statue and other public projects. Daub is recognized as one of the great American sculptors today. He created the statue of Lincoln installed at his birthplace and that of Thomas Jefferson at the University of Virginia. The exhibition provides a unique opportunity for the public to view the process that the sculptor employs in the preparation of his public works. Although Daub expects that his statue of Rosa Parks in Washington, D.C. will be his most celebrated work, he has many projects in the works, including a commission for a statue of Amelia Earhart.

Olguin provides a completely different perspective with her paintings.

“My work points to the relationship and equality of all life, — whether birds, fish, humans, horses, or manatees,”  states Olguin, in her website. “I show this by putting animal and human parts together, such as a bear with human hands, horses with human legs, etc.”

“The imagery of my work shows the multiple states of being in each of us.” Olguin says. “Figurative symbols represent the distortions and centers of wholeness that we struggle with and strive for in our search for growth.”

An artist reception is scheduled, from 4 to 7 p.m. April 12, at the Loft Gallery. Daub will giving an audio visual presentation at 5 p.m.

The entire exhibit San Pedro Treasures will be on display during the First Thursday Art Walk, from 6 to 9 p.m. April 3 and May 1.