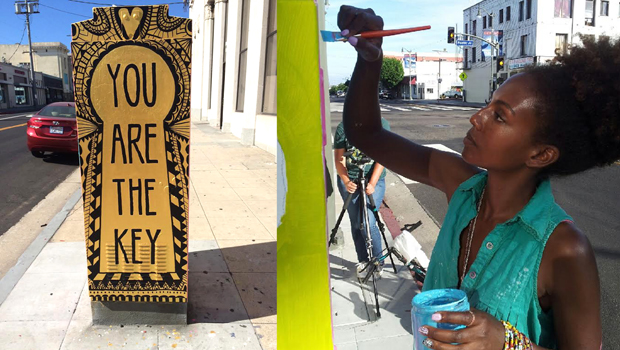 Dialog is taking place in the monthly meetings of the San Pedro Arts Culture and Entertainment group. The dialog centers on the funding and implementation of public art projects to move the group toward the next level of arts advocacy.

In 2007, the district received generous funding of $100,000 a year, for a period of five years, from the Community Redevelopment Agency of Los Angeles. The Agency was disbanded following the 2010 election of Gov. Jerry Brown.The Arts District group now is on a deadline to meet the requirements of the grant. Much of their vision was laid out in a 2008 plan that included developing the successful First Thursday Art Walk, create artist live work spaces and the planning of the newly completed artist resident building on 4th St. and Pacific Ave.
Now the group is working to fulfill the plan to assign the remainder of funds before the end of 2015.

Arts District
The arts district is home to more than 90 visual artists as well as performing arts venues and art galleries. This wealth of creativity is not always discernable to the casual visitor. The group wants to make downtown San Pedro a recognizable center of art for all visitors.

The Warner Grand Theatre, Little Fish Theatre and The Loft Studios anchor the district. Warner Grand Theatre is a 1,500-seat, historic art deco movie palace, Little Fish Theatre is a community theater and The Loft Studios is a 3-story warehouse where a concentration of fine artists do their work. The district’s streets are lined with artist live work spaces.

Studios come alive on the First Thursday Art Walk every month, with gallery receptions, artist open houses, food trucks and live music. But during the remainder of the month it can be hard to find art and artists because the streets seem deserted. Only a few galleries stay open during the week, and some open only during the art walk.
The San Pedro Arts Culture and Entertainment group is hoping to bring a new generation of mural art to the downtown area by commissioning a $15,000 project that will be announced before the end of the year. The goal is to follow in the footsteps of the great Los Angeles mural projects that had their zenith in the 1970s and 80s. The group called upon advisors from the Los Angeles Mural Conservancy to direct and advise on the upcoming project.

Linda Grimes, co-chairwoman of the district group is searching for a location for the mural and plans to send out a call to artists for a design that the design review board will approve.

Utility Box Project
Locals are beginning to take note of the most recent project, the painting of downtown San Pedro electric utility boxes. The boxes, recently completed, enliven the district with the colorful designs of local artists. Artists were asked to submit designs to the district review committee, staffed by some of the most experienced gallerists and artists working in San Pedro.

The five utility boxes are all on Pacific Avenue between 5th and 9th streets. You may have observed the artists working on their creations while you drove around town. Zahra Bejune, Casey Courey-Pickering, Miriam Jackson, Monte Thrasher and Adrienne Wade have all recently completed their projects. Information about the artists can be obtained by researching their websites through the QR code imprinted on each box or by visiting http://www.sanpedrowaterfrontartsdistrict.com/.

The theme for the first stage of this project was “Unexpected Pedro.” However, art in San Pedro is rarely unexpected. The public art projects, now in the planning stages, will add to the many existing public arts projects residing in the downtown area.

Tour of Public Art in San Pedro
Out at Point Fermin artists placed their stamp years ago. Beginning at the furthest end of the point, the controversial Sunken City ruins lay covered with graffiti, or street art —depending on your opinion.
Much to the dismay of some residents, Sunken City — “where the ghetto meets the sea” — has gained worldwide attention with tourists from as far away as Europe and Asia, trekking to the cliffs above the water. Drunken all-night parties, accidents and fights have also added to the colorful reputation of the spot. But the juxtaposition of the wild undisciplined art, along with the breathtaking ocean scenery have driven one neighborhood council to appeal to the City of Los Angeles to open the fenced off area to visitors.

As you begin to head towards the business district, the beloved Three Eyed Fish and his cousin, the Giant Squid on Gaffey Street stand as historical examples of early street art.

Street art created in public locations, usually unsanctioned, is executed outside of the context of traditional art venues. The term gained popularity during the graffiti art boom of the early 1980s and continues to be applied to subsequent incarnations.

Stencil graffiti or sticker art, and street installation or sculpture, are common forms of modern street art. The amiable San Pedro Cat has appeared surreptitiously in spots around town, only to be removed by unappreciative property owners. In the past few weeks the San Pedro Cat made a surprise appearance on the side of the recently vacated courthouse building. She has also been the target of vandals who tore down a small sculpture of the cat in Point Fermin Park. It appears the popular cat has a growing fan base that has launched a Facebook page to express their appreciation of the cat and her anonymous creator.

This past summer the port discovered the impact of public art, when they brought in what was billed as “The World’s Largest Rubber Duck,” a creation of artist Florentijn Hofman of the Netherlands. Two-hundred-seventy-seven-thousand people swarmed the Port of Los Angeles and posted selfies online in an unexpected demonstration of what can be accomplished with a yellow rubber duckie.

San Pedro already has several outdoor and indoor murals that have taken residence in our fair town for many decades. Historic New Deal era Works Progress Administration murals, funded in the depth of the great depression, grace the walls of the Beacon Street U.S. Post Office and San Pedro High School. The school has 9 murals by artist Tom Tyrone Comfort in a series titled, Industrial Life in San Pedro. The subject of the murals beautifully represent the the goal of the Works Project Administration, which was to get people back to work.

Across Pacific Avenue, the outside of the Random Lengths News office is home to a 1995 mural titled “The Spirit of the Sage,”created by Roberto Salas. The mural is a tribute to early inhabitants of the area, the Gabrielino tribe. At the dedication of this mural a sage ceremony was led by Manuel Rocha, spiritual leader of the tribe. During the installation of the mural, a tragic accident at the intersection of Pacific Avenue at 13th Street took the lives of three members of a local family. The mural is dedicated to their memory.

Our newest resident artist, John Van Hammersveld recently completed a fluorescent colored pop-art mural for the interior of the Topaz building on 6th St. His work joins the work of other resident artists such as Eugene Daub, who sculpted the bust of Harry Bridges on the San Pedro waterfront. Public artist Michael Davis has also contributed his modern aesthetic with a nautically influenced concrete and glass landscape and sun dial tower at the Pacific Place Plaza.

Hidden from sight, in the alley behind the Warner Annex, between 5th and 6th streets, is an unsung gem. “Last Night All My Friends Had the Same Dream” by Earon White, is a whimsical mural depicting the nonsensical dreams of San Pedrans, with images of Bukowski and Richard Pryor dancing in their heads. Due to the unfortunate location, this mural is enjoyed primarily by drug addicts and the homeless population.

According to the Mural Conservancy website, proponents of public art believe:

That art is for everyone regardless of their status in society
That the distinctions between high and low art, fine art and folk art are false
That art should not dwell only in rarefied halls but in the places where people live and work
That all Americans could be participants in the making of art and that collaborations work
And last… That the arts can have significant transformative impact on the most significant social problems
of our time

Several hidden treasures, too many to list here, are waiting for those curious enough to search the streets of San Pedro. We look forward to even more in the months and years to come.
For more information about the Arts District, go to www.spacedistrict.org.