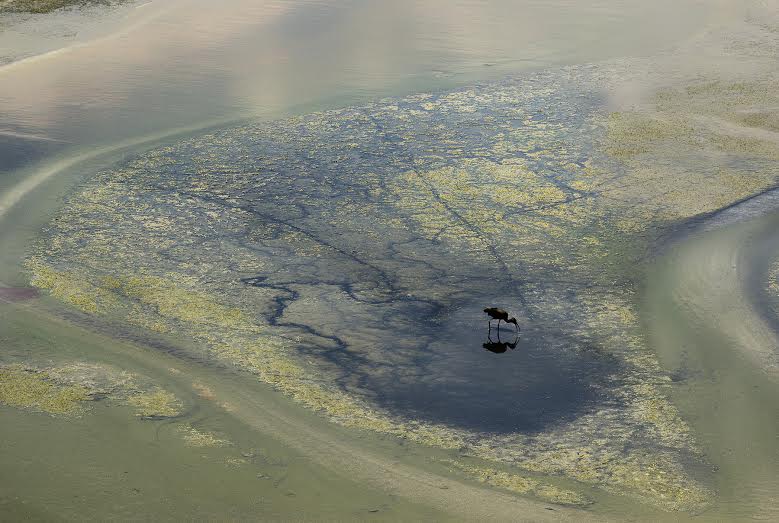 Photographer Ray Carofano has fallen into the Los Angeles River. Well, not literally. Known for his black and white photography of the California Mojave Desert, he now has had an encounter with the Los Angeles River that has elevated his color palette and subject matter with a dramatic look at the 51-mile concrete corridor.

The result is riverrun at Transvagrant/Warschaw Gallery, on exhibit through June 13.

“Taking ‘less-picturesque’ portions of the river as his subject, Carofano’s carefully framed images reveal the not-so-hidden majesty of the concrete, the smooth lines of the river’s channel and its functionality,” stated curator Ron Linden, in a press release. “Sophisticated geometry, atmospheric light and color, and rightness of scale lend these images a painterly quality that requires close observation to determine that they are indeed photographs. Conditions considered appalling appear alluring, serene—each image paying homage to the intersection between nature and the designed environment.”

Carofano is known for presenting the melancholy dystopian landscape of the desert in his series Land of Broken Dreams. With riverrun, he has deconstructed the landscape by tightening his lens to discover the abstract beauty within the concrete ribbon of the river. Carofano does not attempt to represent external reality, but seeks to achieve its effect using shapes, forms, colors and textures.

“These are probably the most geometric compositions I have done in a single body of work,” Carofano said. “I have been thinking about doing a body of work in color for many years, but this work sort of found me.”

An avid bicyclist, Carofano has been riding the river bike path for many years. During a long ride this past year, he took a break to fix a flat tire and the river caught his creative gaze.

“It was just a perfect day when the light was right,” he said. “There was just the right reflection [of light] on the water and I went, ‘Wow!’ The very next day I was back with my camera and started the project. I don’t think I have ever completed a series in such a short period of time.”

The ever-changing waterline and skyline reflected on the river created material for the photographer. The reflections in his photos become abstractions. Many of the images in this series are not recognizable as landscape, and it doesn’t matter.

“Carofano turns his subject into narrator,” Linden said. “The river narrates itself. It makes you want to look and, more importantly, look again.”

Ghost-like reflections of a towering electrical transformer, big rig trucks running their loads down the 710 Freeway, and migrating waterfowl stopping for a rest along their north-south route are all reflected in the water’s many hues.

Many of the geometric images reflect how the concrete banks control the flow in the channel, engineers intervened to prevent the river from its natural tendency to meander. Nevertheless, the river just keeps on rolling, and repairs to the embankment contribute to the artistic ethos.

A particularly striking image of tar repairs to the cracking concrete embankment is reminiscent of California painter Richard Diebenkorn’s residual landscape work. Diebenkorn’s images depict perspectives of suburban views criss-crossed with roadways found on the West Coast, where the artist lived for many years.

In the fourth year of the worst California drought in modern history, some may think that this series is a commentary on water conservation, but Carofano claims no desire to make a political statement with his art.

Instead, he has experienced his own personal revolution with his move into color, away from representational photography and toward contemporary abstraction. It seems much of this collection could have been created with a paint brush, rather than a camera.

Born in Connecticut, Carofano drove to the West Coast in 1966 in an old Jaguar. A 50-year career in commercial photography has allowed him the freedom to pursue his artistic gift. Today, he and his photographer wife, Arneé, live and work at Studio 478 on 7th Street in San Pedro. During the First Thursdays Artwalk, you can drop in to mix with an eclectic group of artists, musicians and intellectuals to discuss art, politics and enjoy a glass of wine.

Although Studio 478 has exhibited many high-profile artists, a decision was made this year to focus on the exhibition and development of the two artists’ own work. Both have shifted their aesthetic toward large-format color abstracts. Eliminating the time consuming distraction of curated exhibits has paid off for the husband and wife team, and it shows in their lush photography series.

“About a year and a half ago my wife and I exchanged thoughts on what we wanted to accomplish in the years ahead,” Carofano said. “As we have been showing other artists’ work in our gallery for over 17 years, we both agreed that it is time to focus on our own projects and personal work and so that is just what we have been doing.”

Ray Carofano’s photographs have been widely exhibited in the United States and abroad, including solo exhibitions at Fototeca de Cuba in Havana, the Museum of Photographic Art in San Diego and Galería de Arte Fotografo in San Miguel de Allende, Mexico. His work can be found in the permanent collections of the Fototeca de Cuba in Havana, the Museum of Fine Art in Houston, the University of Texas at Austin in Austin, Texas and the Santa Barbara Museum of Art in Santa Barbara, among others.

Time: Gallery hours are 11 a.m. to 6 p.m. Monday through Saturday and by appointment.