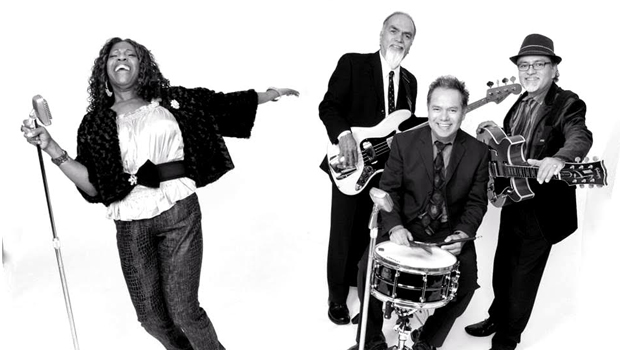 Bring the lawn chairs and the ice chests. Come Labor Day weekend (Sept. 5 and 6) the New Blues Festival II is going down at El Dorado Park.

Over the years, Random Lengths has spent a considerable amount of ink covering Pearl, Lane and Morrison. We will likely cover Goren in the near future. However, we were eager for an artist we haven’t covered who is deserving of a bit of the spotlight.

Pruitt, a Beaumont Texas transplant to Long Beach, calls herself the Soulful Songstress. Her range includes gospel and rhythm and blues, she has performed all around the world, having been a singer and performer all her life.

The Delgado Brothers are a versatile band whose roots go back more than 50 years, starting in the Maravilla public housing in East Los Angeles. There are 11 brothers, straddling two generations.

Their range includes the blues (an original Texas-style blues they call the Stevie Ray Vaughan style), R&B, Latin, roots, rock and Americana music. And they play only original music. No covers.

The versatility in their music could probably be credited to the gap in age between the older and younger brothers in the group. But they’re so good, it really doesn’t matter what they play. This band has the capacity to sonically take you places you either haven’t been in a while, or where you have never been at all.

We were able to reach Pruitt and Joey Delgado recently and talk to them about their set at the New Blues Festival and how they joined forces.

Pruitt and the Delgado Brothers have played together periodically since 2006. Pruitt and Joey were introduced at a housewarming party hosted by their mutual friend, Bobby Zeno, KPFK radio’s “Blues Power” disc jockey.

As Delgado tells it, Zeno hired Pruitt and her backup band to perform at his housewarming party. Joey and his wife were among Zeno’s invited guests.

“When Sherry sang; it was unbelievable,” Delgado recalled of the evening. “She [Pruitt] saw that I was digging her, so she came to our table to sing for my wife and me. She literally brought us to tears. Her singing is just incredible.”

Delgado immediately asked her to perform at his housewarming party. Pruitt consented, for a fee of only $75.

“God bless her,” Delgado said, praising her humility. “Anyway, we agreed on a higher rate. She came to the party, performed and people just lost their minds. We ended up raising $500 or $600 more than I agreed to pay her by just passing the hat around.”

Soon after that, the Delgado Brothers were working on an album and Joey Delgado invited her to be the featured vocalist on it. Pruitt and the Delgado Brothers periodically teamed up for festivals, concerts and blues competitions following the release of their first collaboration.

The most recent competition in which Pruitt and the brothers participated together was the 2011 Blues Challenge in Memphis, Tenn. They placed second.

Check out the YouTube videos of their performances. The chemistry between Pruitt and the Brothers is as obvious as that of peanut butter and jelly.

At the New Blues Festival, Pruitt and the Delgado Brothers are going to perform a mix of the latest material from their discography, ranging from some of their oldest to newest music. Both have released new CDs within the past couple of years.

“Whenever we’ve done festivals or other events and we need to spice it up, we’ll hire Sherry to come in, and you know, raise the roof,” Joey said.

Pruitt is excited about the outdoor festival.

“That’s my favorite,” she said. “I like being outdoors in the open and seeing people have a good time. The club scene is different but the outdoors is magical to me. I’m looking forward to playing the New Blues Festival. It will be exciting to play together with the Delgado Brothers again.”

Pruitt and the Brothers are scheduled to perform on the main stage on the last day of the festival, Sept. 6. But they are by no means the only ones to look out for on that day, or the next.

By our estimation, the inclusion of James Harman on the main stage is a coup for festival goers. Harman’s down home vocals and harmonica playing is both nostalgic and groove-inspiring–”groove inspiring” because his music has the capacity to move your body and soul like a snake to a charmer’s flute.

Harman has played with and been among the best for 50 years. He’s been performing since the ‘60s, and experienced his greatest success after recording several albums in the 1980s and ‘90s.

A number of Harman’s songs have been used in films and on television, including “Kiss of Fire,” which was on the soundtrack of the movie The Accused. Harman was also a frequent guest artist at the Long Beach Blues Festival.

Also on the bill is Dave Widow, an artist that a festival can never go wrong. The Random Lengths News columnist, B. Noel Barr called Widow’s critically acclaimed album, Waiting for the World to End “an outstanding collection of blues songs, demonstrating first-rate production and musicianship.”

The Second, But Golden, Stage

Though the Golden Grove is not the main stage, it will feature Lil’ A and the Allnighters; Kelly Chappue and the Soul Collectors; the Other Mules’ Shadow Blue Featuring Lady Faye; Tracy Niles; Crooked-Eye Tommy, and the Seatbelt, who Random Lengths has profiled a few times over the years.

We couldn’t find a single YouTube video of him performing. But we did get to hear two of his singles, “Heavy Like Liquorice” and “Square of the Dead.” The songwriting and performances of these songs immediately grabbed my attention because they sounded fresh and new, and familiar, at the same time.

The lyrics of “Square of the Dead” reminded me of the sort you’d hear in early blues cuts from the likes of blues legend Robert Johnson and others.

So, we tapped some keys into the Google search engine and found a feature story on Slim and his battle with cancer just as he was beginning to find his voice on Urbanitenews.com.

The Yardbirds, Rolling Stones and The Doors were South River Slim’s gateway to the blues. By the time he was 12, Slim had “immersed himself in the deep blues, devouring old masters like Muddy Waters and Robert Johnson,” according to the online feature.

It chronicled his early years trekking and jamming with his friends on Route 66, playing covers of the above-mentioned artists, as well as Chuck Berry, Bo Diddley and Elvis Presley, along the way.

Family tragedy seemed to ultimately halt his youthful adventures, forcing him to put aside his music and get a day job—only occasionally writing something and playing guitar in his basement.

Just when he had decided to pursue his music again, Slim was diagnosed with throat cancer. Ultimately, music, and his desire to live, are what saved his life. South River Slim is going to be performing on Saturday on the Golden Grove Stage.