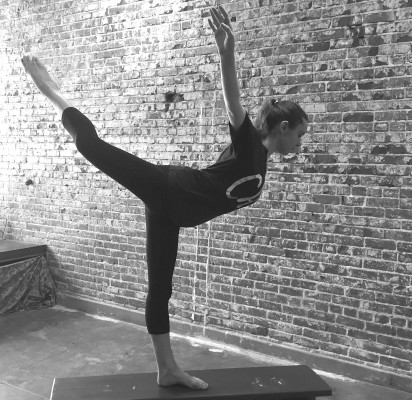 As I arrived at the entrance to Theatrum Elysium San Pedro Repertory, where I was finally about to experience for myself the “powerfully moving” production of Joan of Arc, I suddenly had a doubt.

“Is this the theater?” I inquired as I stood in a back alley watching two young men set up a snack table inside a concrete courtyard surrounded by a locked wrought-iron gate. A small dog appeared and ran to greet me through a slat in the gate . “Yes,” the dog owner replied. “Doors open soon — at 7:30.”

Ten minutes later I was part of a small audience awaiting entrance. Nine cast members escorted us to be seated on set dressed boxes that were arranged in tiered platforms. Before us sat a young woman hunched on the floor in a pool of diffused light against an exposed brick wall.

“This IS becoming intriguing,” I thought… But, what happened after that was, as Laura Linda Bradley, Joan of Arc’s choreographer described, “an experience that shoots you like a roller coaster from the beginning and doesn’t really let you go.”

You would never want to read while on an exciting ride, so too written references in the play’s program would have taken the audience member out of the moment as a participant and landed them on the outer floor as a mere observer. That was director, Aaron Ganz’s reasoning.

He chose not to include the song list or scene references in the program.

“I didn’t want people to focus on the literal or to be constantly referring to their program,” Ganz said. “This piece requires you to stay connected.”

Aaron chose to place much of the play in the moment of the jail cell, after Joan confesses and no one hears from her. It is a time when nothing was written historically. And it was after those three days she recants her confession.

“It left me permission as an artist to wonder what happened to her during those three days when she was left alone hearing the echoes of her confession. That such a high person of faith is left at such a level of emptiness was such a beautiful level of the unknown.”

And yet what is known is the outcome – she gets burned at the stake and “never cries in pain but softly utters God’s words.”

The execution of the beautiful unknown is what this play is about. It was the seamless weaving of artistic elements that made its beauty shine. Two of the golden threads in the play’s tapestry are the music and choreography. Aaron chose much of the richly familiar yet obscurely arranged music recordings, while Laura Linda Bradley conducted the passionate movement. Although classically trained, it was after she studied with Mia Michaels that she fell in love with contemporary dance. Laura describes it as, “… full body expression. It’s such a deeper level of performing than just steps. It is storytelling with the body.”

Surprisingly, many of the Repertory’s actors have had very little dance training, except for Paris who has an extensive ballet background. Laura attributes the performers’ powerful fluidity of movement to their fearless artistry, explaining that “We pushed the dancers to their limits and had them doing crazy lifts and fully exploring and playing in the space.”

I would describe their movement as the dynamic momentum of the well-crafted roller coaster. Ganz, who does not like to carry the title of “playwright” but rather play “conceiver”, also elected to have Joan speak only French.

“When you don’t have to understand the words perfectly, you have to start listening in a different way – and what are you listening to?” he said.

Ganz likened it to watching a foreign film or opera when you stop waiting for words to find you and “look into the eyes to find the river of human connection between. When we don’t understand the words, we start to access the truest parts of the moment. ”

He states he loves his audience just the way they are – French speaking or not – and believes they will disappear into theatrical faith. “I want them to be listening into Joan’s eyes and into her soul. The French is very acceptable because Paris is Joan in the moment,” he said.

If ever I imagined a Joan of Arc in all her strength and vulnerability – driven by the glory of otherworldly inspiration and retracted by the pain of human doubt and fear – she was indeed embodied by Paris Langle in this production. It wasn’t because she looked the part, seemingly 14 years old although 27, small framed but strong and moving with force, but rather it was the connection she made with us as the audience when she looked into our eyes as though we were God – looking to us for comfort yet questioning. This was the direction she was given by Aaron – and she succeeded.

“I felt like I was born to play this part,” Langle told me. Her connections to Joan did seem a bit uncanny. She grew up a missionary child, traveling the world. She first visited Paris was when she was 6 months old and returned nine times. She grew up speaking French.

When she was 12 years old (about Joan’s “chosen” age), her mother had her extensively study Joan of Arc in homeschooling. She became deeply invested in Joan’s faith and sacrifice. It impacted her and carried her through adulthood. “For some reason she is in my soul.” And soul is what Paris and the Repertory give their audience – truthfully and passionately. Joan of Arc runs until Oct. 18. For more information on TESPR’s classes and performances: http://www.sanpedrorep.org/. PH: (424) 264-5747

The series of virtual conversations will cover topics including building the state’s climate resilience, implementing climate policies in an equitable way, aligning financial decision-making with climate realities and other subjects.
Read more
News

Thebaut aligns with the use of solar wind and tidal energy, even nuclear power is a clean energy. As a regional environmental planner he created numerous environmental impact statements and planning studies under the national and state environmental policy act. He said we must have the technologies to create mitigating measures and the knowledge on how we can mitigate the impact.
Read more
Load more