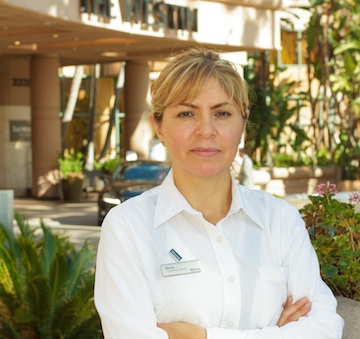 San Pedro resident Rosa Casarrubias has worked as a waitress at the Long Beach Westin Hotel for nine years. Thanks to Measure N, a local ballot referendum approved in 2012 to raise the minimum wage for Long Beach hotel workers to $13 an hour, Casarrubias earns $13.78 an hour. But the 45-year-old mother said it’s not enough.

“The cost of living has changed,” Casarrubias said in Spanish. “Things are now much more expensive than before…. I [still] have to worry about how to pay the rent, gas, electricity.”

Aside from such day-to-day living expenses, Casarrubias also has her daughter’s incidental expenses as a college student. Casarrubias says there are many other families with similar or worse situations, which is why she is advocating another increase in the city’s minimum wage.

“Right now we aren’t really talking about it much,” said Lawren Markle, a spokesman of the Los Angeles Economic Development Corp. “It’s best for now to wait for the economists to produce the study.”

The reports states that:

“The essential thing the minimum wage is doing is keeping more dollars in the local economy,” said Dan Flaming, one of the report’s co-authors. “Low-wage workers, because they spend money immediately… create much more stimulus than higher income families, who have pretty high savings rates.”

This creates a demand for workers to meet the demand of additional consumption, Flaming said. The mix is about 70 percent full-time and 30 percent part-time jobs. Some mom-and-pop business may close, but about the same amount of businesses may surge. While there will be some job losses, the employment growth will be positive, he said.

Still, the Long Beach business community is nervous about the process of the study. Many are advocating caution and scrutiny.

“As this process moves forward, we remain committed to protecting our members and businesses from any type of ordinance that puts them at a competitive disadvantage,” said Jeremy Harris, senior vice president of the Long Beach Area Chamber of Commerce at a Sept. 29 Economic Development Commission meeting. “We understand there is momentum for increasing the minimum wage around the region and parts of the country. However, momentum alone should not be the reason to enact an ordinance.”

Business leaders would like the study to reflect Long Beach, rather than other regions. Other factors to consider include the impact of payroll tax and employer contribution increases to Social Security, Medicare, unemployment and disability insurance.

“Copy and paste policy is not the way to go,” Batton said. “Both city and county adopted mirrored ordinances that were originally drafted for out of state cities…. Input from the business community is crucial when developing a minimum wage ordinance, as businesses are the ones that will live or die from the decisions made.”

Harris said that because Long Beach borders other cities, which may not increase their minimum wages, business may consider moving out or not expanding into Long Beach.It is important to define a small business and employees must mirror Long Beach, he said. Also, “How will a minimum wage ordinance impact nonprofit jobs?” he asked.

Matt Peterson, owner of Legends restaurant and a member of the Belmont Shore Business Association board, worries about the cost of enforcement.

“Doing that enforcement takes dozens, hundreds of additional staffers,” said Peterson at the Sept. 29 forum. “I don’t know where that money is going to come from.”

Concerned about the threat of increased costs and inflation, Peterson said he wants any movement to increase the minimum wage to proceed carefully.

“If people want to get paid more it’s going to cost more in goods and services,” he said.

Though Flaming acknowledges that restaurants will feel a minimum wage increase the most, he said the effect on most other industries will be 7 to 8 percent increases in operating costs, which could be passed on without much impact on consumers.

“Overall, the increase in operating costs is closer to 1 percent across the board for all industries. It will benefit workers a lot but it will not have a significant overall impact in what consumers pay” he said. ”

He said the $15 in 2020 will be worth about $13.56 today. The level of pay for a living wage varies depending on family size and number of people working. The Massachusetts Institute of Technology puts out a living wage calculator with an iteration for Los Angeles County, which Flaming used (found at http://livingwage.mit.edu/counties/06037).

Based on its calculations, a living wage for Los Angeles County is:

“Inflation will have taken a bite out of it but it will still be a lot more than a lot of workers are being paid,” Flaming said. “This will be a living wage, or close to it, for many households but will fall short for some households.”

Francisco Abdul Estim also supports the minimum wage increase. The 52-year-old banquet waiter said that even his $13.80 wage, does not afford him enough money to spend time with his wife and two children, who still live at home, or to go on vacations.

“Vacations are very important for all families, no matter how poor they are,” he said. “The needs are great, because one has to work more hours.”

However, he would like some assurances to come with a new ordinance. When Measure N passed there were some negative impacts that seeped down to workers. Personnel at his work are expected to work more “to account for the increase” in minimum wage and in many occasions they are penalized by having their hours being cut, he said.

“Instead of it helping us how we hoped, it had bit of negative impacts, because there were never any protections for us,” said Estim, who has worked at the Long Beach Westin Hotel for 26 years.

“We need the legal protection that says, ‘Raising the minimum wage to the worker doesn’t mean they should cut hours or augment an overage of work,’ because then we’ll be worse off.”

Casarrubias agrees, but said that there are lessons to learn. She said that when measure N passed managers at the hotel said it wasn’t something good because they would have to raise the cost of the rooms and food and they were going to lose clients.

“If you think about it, these companies don’t lose absolutely anything,” she said. “Measure N passed and they started to cut our hours but raised the cost of food and rooms. So, I don’t understand how they have been affected. On the contrary, they have benefited…. I hope there are new laws that enforce [the minimum wage law].”

Flaming said that one of the benefits of having a city minimum wage is that there is a legal basis for local enforcement of labor law.

“Right now, workers are dependent on an understaffed division in the state department of Industrial Relations for protection, and often they don’t get help,” he said.

“Both the LA city and county minimum wage ordinances and the ordinance proposed for Long Beach have strong enforcement provisions for protecting workers against wage theft such as being paid less than the minimum wage, not being paid for all hours worked, or not being paid overtime rates when working overtime. This applies to informal workers as well as formal workers. None of the provisions of these ordinances are dependent on workers being unionized. Everyone gets these protections.”

The Economic Development Commission was originally scheduled to meet at 6:30 p.m. Nov. 24 to arrive at its final recommendations. However, the group recently asked Mayor Robert Garcia to extend that deadline until some time in the first quarter of 2016, citing concerns about the “unintended consequences” of a wage hike.

The full Long Beach Rising: A City that Works for Everyone Economic Roundtable report is available at: http://economicrt.org/publication/long-beach-rising/

The series of virtual conversations will cover topics including building the state’s climate resilience, implementing climate policies in an equitable way, aligning financial decision-making with climate realities and other subjects.
Read more
News

Thebaut aligns with the use of solar wind and tidal energy, even nuclear power is a clean energy. As a regional environmental planner he created numerous environmental impact statements and planning studies under the national and state environmental policy act. He said we must have the technologies to create mitigating measures and the knowledge on how we can mitigate the impact.
Read more
Load more