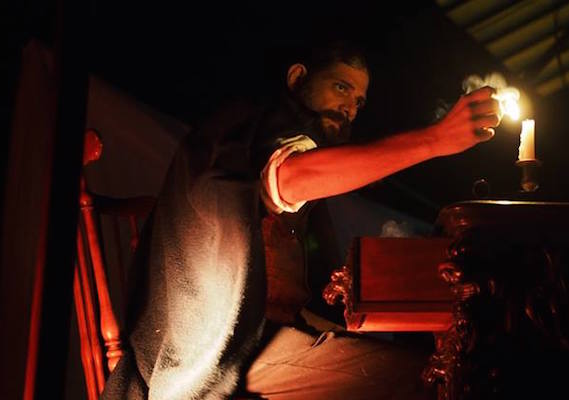 I met Josh Fischel in early 2013. He died yesterday, September 29, 2016. No, that can’t be right. That would mean everything I experienced of and with this man took place in less than four years. That can’t be right.

The first three things I learned about Josh were probably the first three things most people learned about Josh when they met him: he was a big bearded man with a big voice and big plans. Josh was always looking toward the next bigger and better thing he could put together. In 2013, that was RIOTstage. The idea was to create a new niche in the Long Beach theatre scene by staging edgy, raucous musicals. The first two were to be Tommy and Sweeney Todd: The Demon Barber of Fleet Street.

He never got there it turned out he was a little too good at putting together big ensemble musical performances of a more eclectic nature. Like the time he brought together two-dozen musicians to perform Abbey Road—which was only the second half of the show. Or the time he and a string quartet did Elvis Costello’s The Juliet Letters, then after intermission had a 13-piece band he put together do Pet Sounds in its detailed entirety (strings, horns, tympani, sleigh bells, glockenspiel, guïro, the whole shebang). Or hey, remember those times he transformed huge city spaces to do Let It Be, The Nightmare Before Christmas, and The Wall?

That’s just a few shows. During the same time period he also played his own music throughout the country and abroad. He co-created and curated the Live After 5 series. And of course you know about last weekend’s Music Tastes Good festival. He did all that.

He didn’t do it alone, of course. One of his great talents was bringing together the necessary talent—musical, administrative, logistical, technical—to hit whatever target was in his sights. For every one of his projects during these last four years, invariably the individuals he handpicked for a given project were mightily impressed with the new people they got to work with.

I think the reason so many different people got to work on Josh’s big ideas was his ability to see people as specific, idiosyncratic individuals and to treat and employ them as such, very consciously (as he once told me) putting them in positions to contribute uniquely and successfully. On several occasions I was lucky enough to be one of those individuals, and more than once Josh asked me to venture outside of my comfort zone. I was always willing to go there when he asked, because when Josh put his faith in you, you began to believe.

His communication style is something I will miss greatly. To be sure, Josh could do the charismatic diplomacy thing that is probably requisite for any impresario, but on a more personal level Josh would not hesitate to let you know when he was annoyed or pissed off. He would listen to your idea and accept it if he agreed, but he had no problem unceremoniously shooting it down if he didn’t. He did not pretend to like everyone equally—or at all—just as he did not hide his affection.

One of the best bonding experiences Josh and I had came out of a misunderstanding that got me partly thrown off RIOTstage’s Americana. During the initial stages of production I was a consultant and contributed some content. I was also slated to perform, but a few poorly-phrased e-mails on my part to an assistant who didn’t know me well enough to get where I was coming from led to his feeling it would be best if I were replaced in that capacity. We talked it out, patiently and earnestly, and came away from the conflict with no hard feelings and a better sense of each other’s character. He asked me to be a part of several projects afterwards. That’s the kind of guy he was: when you resolved an issue with him, it really was resolved.

I was honored to be in his confidence, a role I enjoyed because—as he told me on numerous occasions—he valued my reactions and that I knew how to keep my mouth shut when he wanted to talk about something that wasn’t for public disclosure. That’s not a story about what a fab friend I was, but an example of how Josh saw people for the individuals they are, and how good he was at letting his friends know how he felt about us.

No reminiscence about Josh can rightly exist without thinking about Abbie, his wife and partner. I add the latter title because “wife” doesn’t really get to the heart of it. It was clear even to those of us who aren’t new-agers that they were spiritual partners. Her warmth and support—which extended not just to him but outward to everyone they knew—sustained him in whatever he did.

I imagine it must have sustained him in what turned out to be his last days, as he plowed through the finish line of Music Tastes Good with little sleep (I asked him over coffee a couple of weeks ago if he was getting enough sleep: he just rolled his eyes). I imagine it’s part of what made it possible for people like me—people who knew about his health struggles of the past year or so, people who couldn’t help noticing how much worse his hearing had gotten, people who were startled when they hugged him at how emaciated his frame had become—to be caught completely off-guard by his passing yesterday.

But what also made it such a shock was that he was just Josh fucking Fischel, a boss, a force of nature, too big to fail. When he gave me that big Josh grin Sunday as I congratulated him for launching Long Beach into a better future, the kind of future he always dreamed of for this city he loved heart and soul, I could never have conceived that he’d be gone in just four days. I only imagined that his future would be what he said it would be: a couple of weeks wrapping up Music Tastes Good details, a three-week European sojourn with Abbie, then on to his next big thing. After all, isn’t that the way these last four years have been: Josh says, Josh does?

The loss of Josh leaves a big hole in the Long Beach community (and beyond), a hole that will never be filled. But the fruits of his too-brief presence can never be rotted by something as mingy and base as death. “There’s a lot of untapped talent in Long Beach, a lot of people who just aren’t getting seen or heard,” he told me two-and-a-half years ago, when much of Long Beach was still getting to know him. “That’s one of the reasons I wanted to create RIOTstage. […] There is so much talent around here—it just needs to be harnessed. I’m not saying I’m necessarily the guy to do that, but I’m definitely going to be one of the guys.”

You definitely were.
Notes
*Photo credit: Matt Maguire
*Yes, the crude double-entendre of the title is intentional. Josh loved that sort of thing.