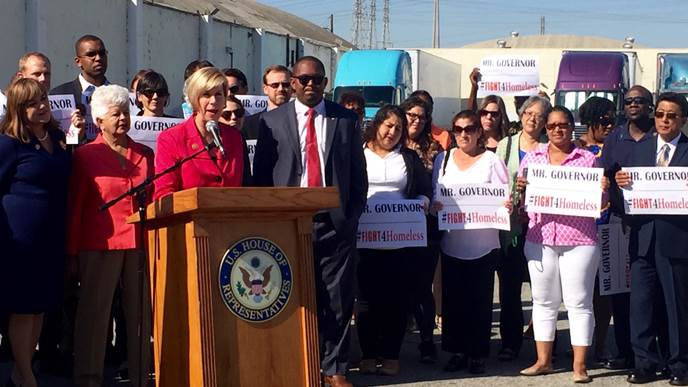 The leaders spoke at a press conference outside of the Winter Weather Shelter in Long Beach, a city which, not unlike other cities and communities in California, is suffering from the unwelcome effects of homelessness. It used to be that homeless people in the city congregated in Lincoln Park, downtown and low-income neighborhoods. These days, the homeless issue has bled into wealthier neighborhoods such as East Long Beach and Belmont Shore. As result, communities are up in arms, blaming homeless people for an increase in crime, ranging from petty theft and indecent exposure. Justified or not, the city is lacking the resources necessary to address the many problems that result from homelessness.

“My colleagues from communities across the state have witnessed a devastating rise in homelessness — proving that homelessness is not a Los Angeles problem, or a San Francisco problem, it is a state problem and demands a statewide solution,” Congressional District 44 Rep. Janice Hahn said.

Hahn and 31 of her colleagues in the House of Representatives wrote a letter to Brown, urging him to provide funds to assist homeless people.

“The magnitude of this crisis on our local communities requires a commitment from all levels of government — federal, state and local — to pursue solutions that will achieve results in addressing this issue,” the letter reads. “We urge you to work with us and our local communities to use every means at your disposal to help our communities develop real solutions by expanding the range of housing and treatment options to this vulnerable population.”

Evan Westrup, a spokesman for the office of the governor, said Brown has been making efforts to curb homelessness.

“We recognize the importance of addressing homelessness in our cities and will continue to support local governments,” said Westrup, in an emailed response. “In fact, the administration is investing billions of dollars into services and programs that support the state’s most vulnerable populations and help address and prevent homelessness.”

He pointed to Assembly Bill 2442 which requires 10 percent of construction units to be designated for transitional foster youth, disabled veterans, or homeless persons; Senate Bill 1380, which establishes the Homeless Coordinating and Financing Council; and AB 1840, a bill that requires state agencies, when hiring for internships and student assistant positions, to give preference to homeless youth.

Yet, none of it appears to provide a level of ongoing funding for homeless people who are not veterans, women or youth.

Supervisor Mark Ridley-Thomas, whose office helped organize the press conference, noted that this year’s fiscal budget included $114 million in new funds to address homelessness across the state. However, because of the size of the state, it is simply insufficient, because only $14 million are ongoing. The balance is one-time only funds.

“We call on the governor to add resources of consequence to help us deal with this crisis,” Ridley-Thomas said.

“This is not an ordinary set of circumstances…. Mr. Governor, we are tied together in a single garment of destiny, whether we are homeless or not and we ask you to help us by a declaration of a state of emergency. If that doesn’t work, use your imagination; use that big brain. Mr. Governor use your moral compass and find a way to help us. ”

The supervisor said he has met with Brown about this issue, but Brown promised only to “look into it and get back to me,” Ridley-Thomas said.

He noted that Brown has refused to support any type of reasonable action, and offering no viable alternative.

“Why is the governor missing in action on this question?” Ridley Thomas asked.

Congressional District 47 Rep. Alan Lowenthal said that one of the reasons homelessness is not given priority is that a natural disaster is not attached to the crisis.

“Because homelessness is invisible to lots of people, people do not respond to this crisis. That is a real indictment to who we are.”

He said the county has laid out a plan to deal with the crisis but there are not enough funds.

The U.S. Department of Housing and Urban Development has estimated that one out of 5 people who are homeless in the United States live in California

Shari Weaver, director Harbor Interfaith Services in San Pedro, said that of the 115,000 in the county who are homeless, 60 to 70 percent are unsheltered.

“We’ve got city, county funds, private and federal,” Weaver said. “The missing part is the state help. If we don’t bring effort to the table, I can’t imagine how it could get worse, but it will.”