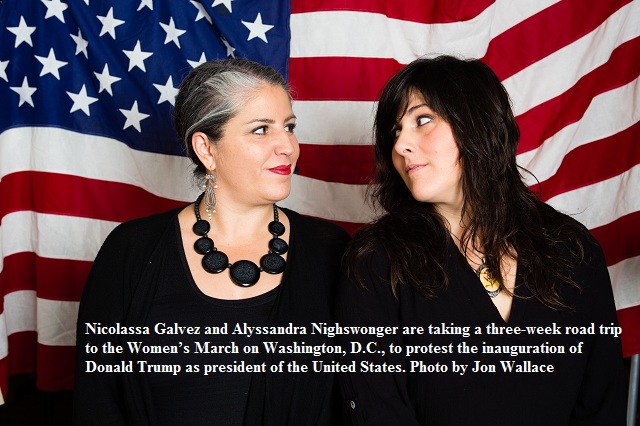 Hiillary Clinton was believed to be a shoo-in for the Oval Office, especially given the Republican nominee’s confession of habitually sexually assaulting women and getting away with it because of his celebrity.

However, the election did not go as expected. Donald Trump became president-elect of the United States, leaving millions of women — gay, straight, and bisexual; cis and transgender; white women and women of color — to reexamine what it means to be an American woman. Ahead of the inauguration, the threat to women’s progress is clear.

Long Beach community arts advocate Nicolassa Galvez and songwriter Alyssandra Nighswonger are two of the many women pondering how they will be impacted in this ominous environment. On Jan. 21, they will be taking a three week road trip across the United States to participate and bear witness to the Women’s March on Washington, D.C. They are calling this road trip, the Road to the American Woman.

The idea for the Women’s March on Washington was formed Nov. 9, the day after the election. Teresa Shook, a grandmother residing in Hawaii, organized 40 of her friends to march on Washington, D.C. Like dominoes, her friends invited their friends and the idea hit the Facebook group Pantsuit Nation. Administrators on Facebook pages generated thousands of sign-ups by the hour and eventually consolidated into one united effort.

A friend suggested to Nighswonger that she go to the march on Washington. As a singer and songwriter who looks for ways to connect with audiences, the idea got the wheels in her mind turning.

“Since the election people have been speaking out and there is a conversation of inclusiveness,” Nighswonger said. “What if we take a road to go there, play music and interview women along the way about their stories and what it means to be a woman and ask them questions?”

One of Nighswonger’s first order of business was inviting Galvez to come along on this trip. Galvez  is a community arts advocate, but her strength lies in her researching, writing and online publishing skills. And,  Galvez, like millions of others, was stunned by the election and eager to do something about it.

“I got together with some women friends to watch the results,” Galvez said. “The week before voting day is always when the big guns come out, the big story and we all know Trump made many comments about women … that was when the comment came out about the sexual assault.

“It came out and no one cared. They were all still talking about the [Clinton] emails. So, on election night, we could see he was gaining. I still didn’t think he could win. Then it hit me, all those people still voted for him and didn’t care about what he said. They don’t care about how he feels about the Mexican community or the Muslim community. It hit me hard and I wondered, ‘What I do now?”’

Nighswonger envisioned going on a road trip during which she would collect stories from various women at the stops along the road to Washington D.C. Her model is loosely based off of blogs like Humans of New York and podcasts like This American Life.

Nighswonger want to engage in “story-catching,” a throwback to the term  songcatchers which is a reference  to the pioneering work of Olive Dame Campbell and Cecil Sharp to preserve the traditional Scots- Irish ballads of Appalachia.

She reflected on the idea and scope of that project and the influence that music has on today’s stories.

The modern American woman is made up of many voices. American feminism has taken a beating during this recent election cycle for ignoring intersectional discrimination. It has been criticized for its propensity for telling women of color where their interests lie.

Bringing diverse voices and stories into this discussion is foremost on the minds of Galvez and Nighswonger. This mission of inclusiveness also mirrors that of the organizers for the upcoming march in Washington D.C.

The original organizers of the D.C. march were white. It’s an ironic twist since Clinton’s weakness with white women in key states cost her the election. Trump won their support 53-43 nationwide. It’s imperative that diverse voices actively participate in this social discussion. This is what Road to the American Woman seeks to do.

To address this issue Vanessa Wruble, who worked alongside a page administrator for the march, made efforts to include women of different backgrounds. The point was to make sure their voices were reflected in meetings and the decision-making process.

Tamika D. Mallory, Carmen Perez and Linda Sarsour came on to work with the team as national co-chairwomen.

These three women organized a 250-mile march from New York to Washington D.C. to demand changes in America’s criminal justice system. The site acknowledges these activists as, “not tokens, but dynamic and powerful leaders who have been organizing intersectional mobilizations for their entire careers.”

Shortly after their first fundraiser for their road trip, Galvez and Nighswonger spoke about what it means to each of them to be an American Woman now.

“For me personally I define it as a very traditional role,” Galvez said. “Growing up, it was like, ‘follow the rules, listen to authority.’ As far as my academics or politics, I’m super liberal but my personal life was very reserved.”

For Galvez, the last couple of years have shown a breakthrough in redefining what the American woman is and it’s been difficult. Before, there was a formula for how her personal life should look. Then, there was what she calls, “this explosion.” It blew out any formulas for her, both personally and on matters of gender and sexuality.

“I feel everybody is a little bit everywhere,” Galvez said. “It used to be gay or straight. Now there’s so many definitions. For me in defining an American woman, this trip is about expanding my understanding of all the possibilities out there, so that I can start finding that definition for myself. I’m not even in that place right now. I’m still in the place of post- explosion.”

As early as this past year, those labels didn’t have an effect on her. The first time she considered being single, having a non-traditional relationship and leaving her job was after a recent break up. Her degree in social justice opened up a world to her that she didn’t know. She came to realize that there still are many labels and invisible prejudices in society.

Some of labels that stand out to Galvez and Nighswonger are both positive and negative.

“I identify with mestiza, (mixed with European and indigenous) and chingona, or bad ass,” Galvez said. “Some people see it as a bad word, but to me, it’s a bad word because women aren’t allowed to be badass. Another positive term that is new to me is ‘queen,’ as a term of endearment. Negative ones are, ‘overweight,’ ‘lady’ or “proper.”’

“For negative ones, ‘honey,’ ‘sweetie, or ‘Miss,’” Nighswonger interjected. “It’s very condescending. For positive ones, ‘power woman’ and ‘boss.’”

Nighswonger comes from a blended family. Both her parents were on their second marriage when she was born. She had half-siblings from each parent. There was some turmoil making ends meet and keeping everyone happy. Also, her mother had leukemia. She had a bone marrow transplant and has been in a 20-year remission, but it was difficult growing up.

“I was taking care of her for a long time,” Nighswonger said. “It was hard to find that role model of what it means to be a strong woman. It was hard to define that when I was younger and was always hunting.”

That changed when she got to college and read a poetry book titled, Naked by Alma Luz Villanueva, a Latina writer from San Francisco.

“She had a vibrancy and this ferociousness and this love and this warmth that I’d never encountered quite like that before,” Nighswonger said. “I identified with her heavily. Maybe being a real woman is more raw than I thought and stronger than I thought.”

Nighswonger’s mother turned out to be a strong role model to her all along. While sick, she studied and became a registered nurse. When she became strong enough in her wheelchair, she got a job at a call center at Kaiser Permanente, then became a Lamaze instructor and later a lactation consultant. Now, she is a head lactation consultant in California. She’s even served on the board of La Leche League, a nonprofit dedicated to providing education and support to women who believe breastfeeding as an important element in the healthy development of the baby and mother.

“Being an American woman is being proud of your fortitude,” Nighswonger said. “We live in a diverse country, everyone has different hardships. The feminine role has this sometimes subtle strength and sometimes ferocious strength. It’s powerful. We live in a beautiful country. Even though there is this tension now there is so much diversity at our fingertips. Being an American woman you can hone in on that diversity and strength. It’s something to be proud of.”

The documentary tour schedule is available at http://tinyurl.com/RoadtotheAmericanWoman