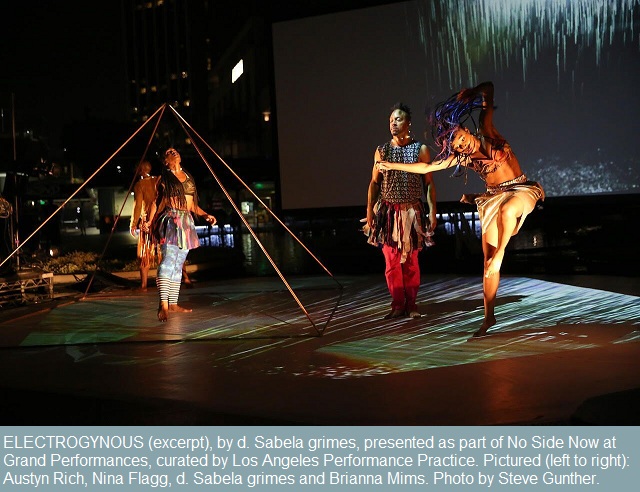 Across cultures and time, humans have had an appreciation of and connection with dance. Language does not limit dance. There are no boundaries to it; it only requires an open mind and imagination. Grand Performances recently broke the boundaries of imagination.

In No Side Now: Dance that Abandons Boundaries on Aug. 4 at Grand Performances, four artists’ visions and works are connected into a cohesive and stunning production. The pieces drew on movement styles from broad sources including street dance, studio practices and girlhood games.

Choreographer Milka Djordjevich’s Anthem questions contemporary dance’s tendency towards neutrality, authenticity and the desexualization of the female body. Four women costumed in pants performed a dance that began, although fluid in form, with restraint. They danced in unison in lines and circles repetitively.

They moved switching their hands back and forth, from their frontal regions where their hips and thighs met and then back onto their buttocks. This was the dance’s foundation. It escalated to rhythmic chest patting, hand clapping and paddy cake with alternating partners. The dancers tackled multiple contradictory tasks, embracing the performance of invented female persona. Their continuous movements amplified the dance with increasingly elaborate configurations. Anthem ultimately transitioned into full-blown jazz dancing vivacity complete with an original score by Chris Peck.

Micaela Taylor with her company, The TL Collective, have a reputation for precision and a distinctive movement style that blends contemporary dance with theatrical hip-hop.

Much of this piece was fueled by sharp techno and synth-rich music. But it had a whole lot of soul, too. The dancers’ bodies were precision instruments, yet they embodied liberation. It was a performance, the energy of which you couldn’t take your eyes off.

They created a synthesis of shape, line and gesture. Popmadness was alive with popping and jazz dancing, character-driven theatrics and ferocious funkiness. The dancers were simultaneously robotic and sensuous while personifying the inventiveness of a new generation of dancers in a world of complexity and opportunity.

This solo piece re-examines Amy O’Neal’s most recent group work, Opposing Forces, developed in collaboration with a company of b-boys.

After enjoying a multi-city U.S. tour, O’Neal altered her original choreography. It went through an evolution toward self-mastery. The piece originally confronted fears of the feminine in the masculine world of break dance via a solo that travels through the complexities of physical, cultural and creative power.

O’Neal hit the stage all in black and her face covered with a hoody. She stayed close to the ground for much of the performance. The screen behind her illuminated the dark stage with two rays of light forming an “X” and then, purple haze with soft pink in the center.

With mind-blowing skill, O’Neal captured the full gamut of dance. She moved seamlessly between balletic effervescence and technical jazz — Broadway hallmarks. She even presented a subtle encapsulation of post-modern and flowed right into isolation, hip-hop and breaking.

Her movements coupled with her black clothing made O’Neal serpentine — a black cord of energy traversing different landscapes.

A description of d. Sabela grimes’ works offers a look into the depth of his piece, Electrogynous:

Electrogynous could be a theatrical work with its dramatic clarity.

The five-person troupe, choreographed by d. Sabela grimes, entered a dimly lit stage. They wore strings of electric lights around their necks like nooses. One dancer repeated, “I.”

The powerful entrance pointed to the range and depth of what was to come. The piece covered far-reaching past and future of black identity, expressed through soundscapes, video and spoken word. It countered historically imposed notions of femininity and masculinity.

The poetry was as astounding as the dance.

She be darker than her silhouette’s
God’s home brew, ocean of soul
hair full of Coltrane notes.

The finale was performed to a remix of Bob Marley’s Exodus. This powerfully expressed piece was a narrative. They danced under a pyramid, through sparring movements into elegant kinetics exemplifying a hard fought and spiritual journey to the lyric, “wipe away transgressions” to “move,” fusing hand claps, deeply funky hip-hop and jazz dancing.

The end of the performance was highlighted with a few words from a performer expressing a self-awareness through a source of higher power:

“I come. Eternal harvest reaper of no things grim. I, self-law and master, bear witness to the evidence of language, independent of words.”