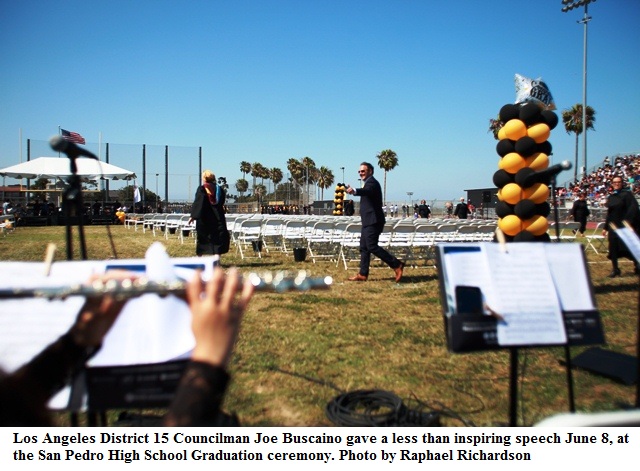 I would like to address those parents and students who misunderstood the intent of my graduation speech at SPHS on Friday. My intention was to focus on misunderstanding and meaning in our culture today. As a gesture of good faith, here is the text of the entire speech for those who were not there, or for those of you who would like to review. My apologies to those who were not inspired by the intention of the speech.

Principal Stevens, teachers, parents, and graduates of the Class of 2018,

We live in very complex times.

Competition in today’s world is tougher than ever before.

All of you are constantly expected to perform at optimized human levels.

You compete to get on band, the soccer team or the football team, cheerleading, or the drama program, AP classes or the debate team.

You compete to get into the university of your choice – which may require AT LEAST a 4.0 GPA these days.

You will compete to get a good job.

And you will certainly compete for a good place to live.

Competition IS the world we currently live in.

Competition has its benefits. It focuses us on using our strengths and talents to achieve our goals.

But the partner to competition is cooperation.

In every aspect of life, we need to work with others to achieve our personal goals and our collective goals.

In this life, the common thread regardless of what community, or city, or country you live in, is that we all want to GROW and be BETTER.

We want to be the people that make America better than it has ever been.

Being honorable and truthful and following rules and laws creates order in a civilization that makes life on this planet better for all of us.

That is not what seems to be happening in our world today.

Fair competition and good faith cooperation are drowning in a world full of nonsense.

Win at ANY cost.

Just a few years ago, The United States Environmental Protection Agency found that Volkswagen had INTENTIONALLY programmed their TDI diesel engines to pass emissions controls during testing to meet US standards, but emit up to 40 times allowable emissions during real world driving.

We see this play out in amateur and professional sports. The entire Russian Winter Olympics team was banned from the most recent Games in South Korea for systematic institutional doping.

They literally built a doping factory and then doped all of their athletes!

We see this play out in the modern phenomenon of fake news.

Scientists conducting a study between 2006 and 2017 found that false news spread “farther, deeper, and more broadly” on Twitter than true news.

Their study published in the journal Science found that the truth typically took about six times as long as a falsehood to reach people.

We live in a world where all of us have access to the collective knowledge of all of history right in our pockets right now, but increasingly know less and less about the reality of our everyday lives. Too many of us buy into too many false stories, misconceptions, and outright lies which end up hurting us.

I see it everyday from my point of view as the Councilmember who represents more than 250,000 people in LA City Hall. I do my best to present situations as accurately as possible, but disappointingly regardless of the truthfulness of my position, people end up not accepting the truth.

Let me give you an example that you might be able to relate to.

Channel Street Skatepark here in San Pedro was built illegally without plans or permits. It had to be closed down to add onto the 110 freeway above it.

The only way to open it legally is to create the missing blueprints in order to get the proper permitting.

My office has even contributed $10,000 to pay for the permits. I have recruited architects to develop the blueprints and my staff is shepherding the application through the city’s planning process.

But if you were to look on social media, you would think that I am the one keeping the park closed, which could not be further from the truth because I want it OPEN!

How is reality so easily lost?

We live in a society where more often than not, we are not speaking the same language. And I’m not talking about a spoken language like English, Spanish, Korean, or Italian.

Today, too often, there is so much misunderstanding and misinformation that it has become increasingly difficult to communicate effectively.

How many times a day do you feel like “WTF are you talking about?” I think this 50 times a day. It’s even possible you may be thinking it right now.

Our ability to communicate, to be heard, to listen, to understand, to distill, to make fair judgment is the most important development to the evolution of humanity and the evolution of the self.

While the arrival of social media has given us a tool to reach much wider audiences than ever possible before, it has also created a situation where misunderstanding and misinformation can spread much faster than ever before in history.

One of the most critical skills of successful people whether in the business world or private life is their ability to communicate effectively.

And we are sadly losing our ability to communicate effectively with each other. We are NOT speaking the same language anymore.

Our society has gone wild with too much nonsense. Too much inauthentic exchange of information. Inaccurate depictions of facts. Too much deception.

Don’t be the boy (or girl) that cried wolf.

You must say what you mean and mean what you say. Otherwise we are breeding chaos in our world through misunderstanding.

You must know the difference between a credible source and propaganda.

You must be accurate with your motivations and your intentions.

Follow the Golden Rule: do unto others as you would have them do unto you.

The alternative is a society where our communication becomes meaningless, where our science becomes distrusted, where chaos rules and meaning is lost.

I’m certain that YOUR generation will be the one to put a stop to the toxic environment that exists today.

It is up to all of you to stand up and reject the indecency currently happening in our society. It is up to you Pirates to turn this ship around.

I know this is possible because I personally know many of you graduating today. Many of you were in my wife Jay’s class at White Point Elementary, and many others spent three years at Dana Middle School with my sister Michelle Crow. I know you will become great adults and the future leaders of our city and our country!

Now go and be the change that makes our society and this city better!