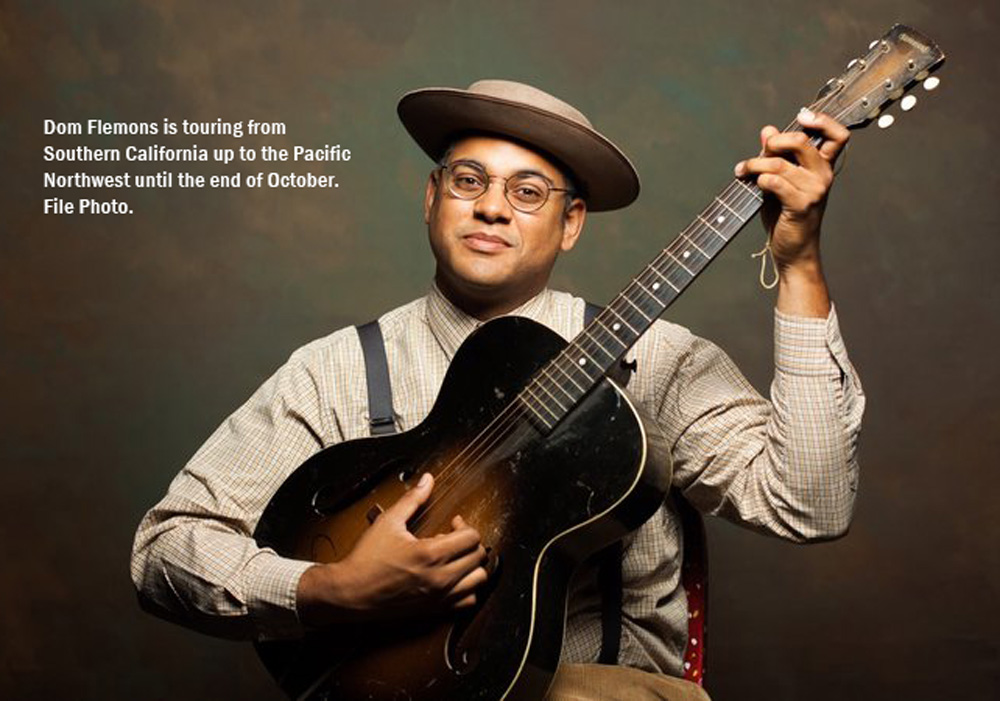 During this time, a young Flemons connected with veteran percussionist, banjo player and folklorist Sule Greg Wilson, who worked with everyone from Nigerian percussionists to Piedmont blues performers. Wilson became a coach to Flemons and helped him develop his playing and historic knowledge of blues and folk music. Flemons developed a passion for learning songs and teaching history. Now, as an ethnomusicologist, Flemons digs into the African American roots of American folk music, jazz and blues, presenting music and stories of the American West.

On Sept. 22, Flemons will perform numbers from his solo album, Dom Flemons Presents Black Cowboys at San Pedro’s Grand Annex. Noting its historical context, the album was released in March on the Grammy winning record label Smithsonian Folkways. The recording has the distinguished stature of being part of the African American Legacy Recordings series. Further, it was co-produced with the Smithsonian National Museum of African American History and Culture in Washington, D.C.

The album also comes with a 40-page liner note booklet. It is a reminder that the old West was a much more diverse environment than Western films would have us believe.

“Some people are into folk music generally; some are into the academic aspect; some like to link through rock music,” Flemons said. “Record collectors like to hear that old style music the way I play it. Particularly since social media has grown, [it has] lead younger people on a path to get into this music easier than they could have in years past.”

On Black Cowboy, Flemons covered four narratives which he explained bridge present-day hip-hop and the historic African American music he has studied.

The main historical bridge is the idea of vernacular language and culture being translated into popular music. Over time popular music sources were forgotten. In his research Flemons reconnected those dots to take different schools of thought and let the listener piece them together, creating a bigger picture and idea.

“African American culture being a migrant culture all the way from emancipation pretty much to the modern era, [moved] with the work, the social situations and the cultural development in the United States,” Flemons said. “There’s a lot of movement and culture that represents especially, the African American culture of the West Coast. It’s not just black culture. Black culture can also mean [different] economic classes … black Native Americans, even people of African descent that are from Mexico, which is a different culture too.”

In his first narrative, Flemons placed together iconic songs with stories in his liner notes associated with black cowboys. They include Home On the Range and Goodbye Old Paint, a traditional western song created by black cowboy, Charley Willis.

For narrative No. 2, Flemons brought the African American songster tradition. Songsters were musicians and songwriters from the early days of recorded technology who played a variety of songs. Songsters who recorded numbers associated with the black cowboys linked to southern vernacular music as descendants of these cowboys. Flemons decided to pick three songsters that have cowboy songs within their repertoires, Leadbelly, Henry Ragtime Texas Thomas and Lightnin Hopkins.

“[With this historical backdrop] you find a lot of information and a lot of culture, especially in the African American community,” he said.

Flemons noted that this migrant culture also includes the way that African Americans interacted with the different parts of white culture. In the West, white culture turns into all sorts of different ethnic groups like Italian, German Scottish and Irish. That’s what the songsters were bringing to the forum.

In the third narrative Flemons brought in classic cowboy songs like, Little Joe the Ranger and Tying Knots in the Devil’s Tail, which referenced his own background from Arizona. These well-known cowboy songs tell you all about the profession of ranching and being a cowhand on the range.

Flemons then created soundscapes, pieces that evoke sounds of black cowboys in the fourth narrative. That included southern tradition songs like Knox County Stomp and a well-known cowboy song, Red River Valley, which he turned into a Mississippi fife and drum number and called it The March of Red River Valley. Finally, he did a song to reference vaqueros negros, one of the names that the early black cowboys took. He took a popular African American folk song, John Henry and turned it into an instrumental called  John Henry y Los Vaqueros.

Flemons saw there wasn’t an album that represented this big idea anywhere. Putting this history into a comprehensive overview was something that he felt needed to be done. He identifies the time as a peculiar part of our history. It was during reconstruction when, on the East Coast, the social change that reconstruction promised, “Didn’t pan out the way that folks had hoped.”

“So, they just say that reconstruction failed,” Flemons said. “But in western culture because of the tough times people [persisted] to have on the East Coast, people continued to move out west. Many people came up with different ways to create a life for themselves.”

Now more than ever, these are the times we need to tell people that there were people who made it and were able to create something despite the obstacles, rather than being beaten down by the obstacles themselves, Flemons noted,

“That is a very poignant statement to make without trying to tear down another narrative,” Flemons said.

What brought this project together, in part, was that many of the black cowboys became Pullman porters, who were a liaison between the black sections of town during segregation. Within this historical lens, this became a far deeper story than just talking about cowboys. Flemons posits that during this time because these people were following the work, they created progress just by being present as a part of bigger society. That turned into a social cachet. From that, we saw people like Martin Luther King Jr. rise. Before King there was A. Philip Randolph who was pushing and creating a forum in which King could work. In 1925, Randolph organized and led the Brotherhood of Sleeping Car Porters. He was also a leader in the civil rights and American labor movements and socialist political party.

Flemons is so steeped in this history that he followed the westward path taken by Lewis and Clark and their slave, York. One of his biggest insights from this journey is that all of the land still exists today as it did when Lewis and Clark travelled following the Louisiana Purchase.

“The significance of the landscape is something,” Flemons said. “The land is … the most American out of anything else. That is both something that we take pride in but also it has led to countless debates and controversies through the land and specifically who owns the land and who lives on [it] and why it is so important.”

The American identity is “in flux in a huge way recently.”

Flemons said what can help is for people to educate themselves through the entire history and try to remove themselves from the emotions they might feel and try to look at history on a broad scale.

Flemons also hosts a podcast, American Songster Radio, which is about to launch its second season in October. The season will be dedicated completely to the black cowboys.

“The United States is definitely not a perfect narrative, never has been,” Flemons said. “But, if you think of the broad sense of history [leading] to the modern day, we’ll find that there have been achievements that have been progressive. Not to negate any of the negative but progress has been made over several [centuries]. Many people could benefit for adding those things into the narratives that they are wanting to discuss.”

The songster will perform in concert after teaching a hands-on traditional rhythm bones workshop.