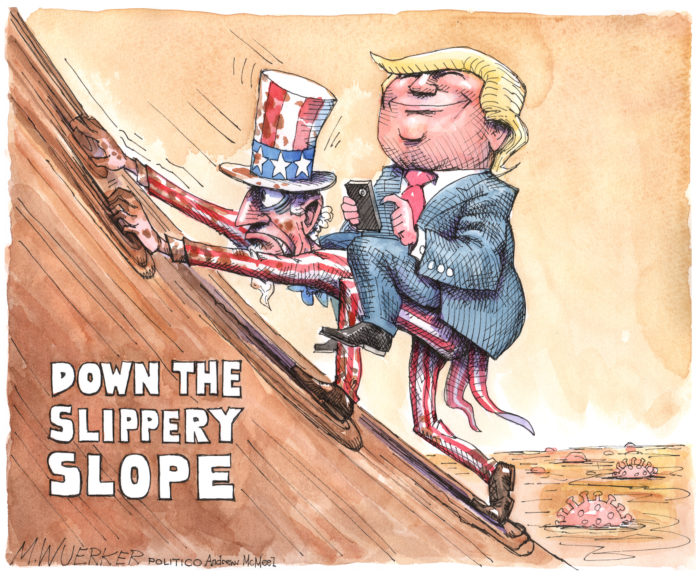 I was stopped on the sidewalk the other day by one of our well known personalities who accused me of abetting in the cover up of the truth behind the pandemic. She told me that, “She knows a lot of people in town and more on Facebook, and not one of them knows a person who has been infected nor died of COVID-19.”

Neither had I at that point, but I told her I had reason to believe that the Los Angeles County Health Department stats were reasonably accurate and you can’t cover up 150,000 deaths. She stormed off in a huff.

I finished drinking my coffee thinking that people just don’t believe what they don’t personally experience. Their truths are only experientially referenced.

I suppose this is part of the universal human condition — individuals bundling together political beliefs, personal prejudices and cultural preferences to form one perspective through which to judge life and others. This only changes when you hit one of those brick walls in life like going to war and coming back wounded, ending up homeless or having a near death experience or getting infected with COVID-19. Sooner or later, life will give you a scar that alters your perspective.

Since that sidewalk conversation, I ran into the woman who hosted the infamous party out at Trump National golf course back in March — the one with all the Palos Verdes Republicans thinking that the coronavirus was a hoax and refusing to socially distance. Only later did it come out that a man who attended the party was infected and died.  I’ve learned that since that party, the gracious host also became ill from COVID-19, but survived.

She looked a lot worse for wear, but she is no longer denying the existence of COVID-19.  However, her personal truth has been expanded to include hydroxychloroquine as a cure.

The problem is that in this small corner of Los Angeles County, the San Pedro Harbor Area (not unlike many other parts of California or the nation), the ratio of infections to total population is small like .009 percent, fortunately. This, I might add, is about the same number of homeless people in our community, except the homeless are much more visible than the infected. We should not be complacent.

And as much as I hear people complain about “some people not wearing masks,” it appears as though we’re doing a pretty good job of keeping this pandemic in check here, while the rest of Los Angeles County is surging with infections and parts of Orange County are quickly approaching the brick wall of reality (think of our neighbors in Huntington Beach). Over the past week, Orange County has averaged 462 new cases and 10.3 new deaths per day. The number of confirmed infections is currently doubling every 52.1 days, according to the Orange County Health Department. So much for the anti-maskers.

Yet, I recently received this message from Justin Clark, political director of the Los Angeles Republican Party, which states:

With each passing day life feels more and more like a dystopian novel. We live in a time where we are being conditioned by large swaths of society to think it is selfish and dangerous to protect your freedom and God given rights. The consequences of this are already being realized.

In California, we are rolling back the reopening of our economy. The talking points are simple: lockdowns save lives. If you dare question this doctrine you are labeled anti-science or must think the virus is a hoax. These claims are outlandish and a smoke screen. They are meant to distract you from the very clear reality that this was never about safety. This is, and always has been, about control.

Now I’m not going to take the time to deconstruct this small piece of political propaganda for you as it is readily evident to anyone who can read. But clearly, when he gets to “protect your freedom and God given rights,” Mr. Clark is pushing knee jerk emotional truth buttons.

Yet, even he later admits that “Mask usage, social distancing, limiting capacity, are a lot more digestible than simply closing everything down.”  This is a far cry from the original “it’s all a hoax” or a “Wuhan conspiracy” or that “it will magically disappear by April” myths. The PV Republicans should take heed of this —wear a mask and consider voting by mail.

What Mr. Clark and others are actually arguing for is that we get back to normal as fast as possible, open up schools, get these “lazy” unemployed people back to work and get this economy rolling again just to make you-know-who look great again. It doesn’t matter who or how many get infected.

But quickly getting back to normal is just not in the cards. This is true in all of the red states that have taken this rapid reopen approach. Those states now have surging infection rates — most notably Florida, Mississippi, Texas, Alabama and Arizona and expanding into more rural populations with less health care services than Los Angeles. The dead bodies are stacking up in Brownsville, Tex., reports say. What stands out amongst all of these late-comers to the COVID-19 party is California — in particular Southern California. Here our leaders took the threat seriously earlier than most and stayed locked down longer than many. Yet, here we are, living in this dystopian novel. But who is actually the author? We still are not out of this pandemic and may not be for some while.

The tides are beginning to turn against the MAGA man even in parts of the Golden State that are traditionally red. Those places are starting to turn blue for Joe Biden, who now has the support of 67% of respondents in the UC Berkeley Institute of Governmental Studies poll, while Donald Trump has fallen to 28%.  Not that this is a battleground state that will decide the national election, but it may be the one that crushes the Republican revolt.

However, the election is getting desperate as Rep. Alan Lowenthal (D-Long Beach) writes, “My Republican opponent just tweeted out a fake photoshopped CNN poll showing the president leading former Vice President Biden. He called the poll “new” and “Embarrassing for the Democrats.” What’s embarrassing is that the poll wasn’t new. It wasn’t even real.”

And you can bank on the Republicans to become even more irate and irrational the closer to  election day and the closer Cyrus Vance Jr., the New York District Attorney gets to revealing the MAGA scandal behind the taxes of the man corrupting the White House and the nation.