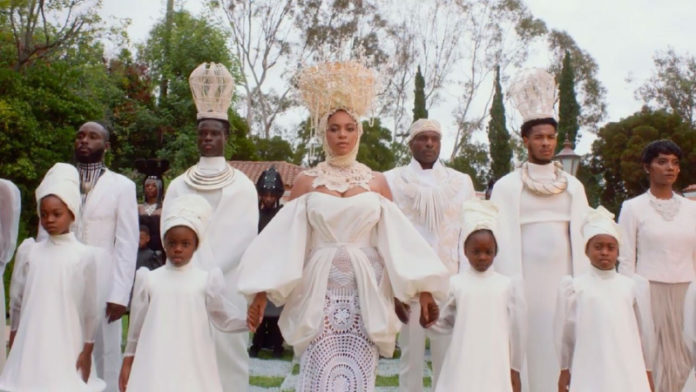 Beyoncé Knowles-Carter’s gift to the world

My assignment is to mount an expedition deep into the heart of Black is King, the just-released musical film and visual album by Beyoncé Knowles-Carter, and return with the answers to the questions that these days weigh so heavily on the minds of white people — you know, whether black lives matter, and why that should matter to someone living a white life. Yeah, those questions. Sweet assignment.

Or it might be, except that Black is King was never intended to answer white questions. Its music, visuals and message were conceived, created and calibrated so as to reach Africans throughout the diaspora.

Black is King was not green-lighted to sort and organize white supremacy’s rusty old parts, arranging the whats, hows and whys in a way that makes clear its simple, enduring machinery. Beyoncé was looking forward as she created this companion piece to The Lion King. With Black is King, she is advancing the story, encouraging and celebrating the future, lifting and being lifted by possibilities far beyond the small minds and cramped comfort zones that allow the legal tools and institutions from the days of slavery to continue to support white supremacy.

Black is King wasn’t intended to clarify why so many white people have taken to the streets in alliance with the cause of Black Lives Matter, although I would venture to say that the movement’s legions of supporters understand that “black lives matter” isn’t a rallying cry against white people, but a statement of affirmation against American institutions that state otherwise.

Reports from the entertainment industry are describing Black is King as an urgent passion project, needed now, in this moment, more than ever before.

Black is King was released on July 31 as a visual companion to the 2019 album The Lion King: The Gift, a tie-in album curated by Beyoncé for the 2019 remake of The Lion King. After watching the musical film, a few thoughts came to mind.

Black people of African descent everywhere have long sought to center our origin story in a way that’s truthful, and nurturing to our psyche and spirit and intentionally forward looking. It’s the reason we reflect the idea that our origins come from royalty and power, something not defined by slavery and humiliation. Given the  number of films  that use the African savannah as a backdrop, it’s amazing how rare it is for black folks to be the center of those stories. That’s even true of the original animated feature The Lion King, Walt Disney Animation Studio’s first original story not based on an existing work.

It used to annoy me that whenever I saw stories set in Africa, the stories were about the animals, or human stories of indeterminate cultures were told through anthropomorphized animals. Rarely did I see stories about Africa from Africans from an African perspective.

This Disney animated feature follows the young Prince Simba, the heir of his father Mufasa. Simba’s wicked uncle Scar plots to usurp Mufasa’s throne by luring father and son into a trap, but Simba escapes and only Mufasa is killed. Simba returns as an adult to take back his homeland from his uncle with the help of his friends.

The filmmakers have said that the story of The Lion King was inspired by the lives of Joseph and Moses, from the Bible, and William Shakespeare’s Hamlet. Black is King follows the same script, except that the entire album takes a afropunk and afrofuturist visual and sonic aesthetic, opening up the story to invite conversations about the origins of the African diaspora, and the future of black people the world over. Despite all the various moving parts, the film holds together tightly and with intention.

The film opens with a scene that references the story of Moses and his mother spiriting him away down the river  in a watertight basket. Beyoncé sings Bigger, a song that seemingly prophesies the future of her newborn son. The recentering of this story in West Africa, also recalibrates the focus of the Abrahamic faiths to include animism — the belief that objects, places and creatures all possess a distinct spiritual essence. Potentially, animism perceives all things — animals, plants, rocks, rivers, weather systems, human handiwork and perhaps even words — as animated and alive.

When Black is King transitions from the first song to the second, Find Your Way Back, the scene is reminiscent of the birth of Jesus when a black child from heaven comes to earth. From the beginning until this point, it’s clear that this film does more than just center black people within The Lion King, it recenters black women and black womanhood within The Lion King. Here and in other places in Black is King, Beyoncé pushes a vision of shared power, shared responsibility and shared possibility balancing the role of women and men while pushing back against the most toxic aspect of black masculinity and patriarchy.

Immediately after the release of Black is King, the work was panned as capitalism draped in African aesthetics. Some have assigned the critique as being a charge of cultural appropriation. The point can be argued, but I’m not sure it would get much traction. Black is King, on its own, was reminiscent of Tyler Perry’s inspirational words at the 2019 BET Image Awards, when he recounted how his life’s work has been about “getting others across.”

“It’s all about trying to help somebody cross,” Perry said. “While everybody else is fighting for a seat at the table, talking about ‘#OscarsSoWhite, #OscarsSoWhite,’ I said, ‘Y’all go ahead and do that. While you’re fighting for a seat at the table, I’ll be down in Atlanta building my own.’ Because what I know for sure is that if I could just build this table, God will prepare it for me in the presence of my enemies.”

Referring to the name of the award he was receiving, Ultimate Icon Award, Perry said, “rather than being an icon, I want to be an inspiration. I want you to hear this, every dreamer in this room. There are people whose lives are tied to your dream. Own your stuff, own your business, own your way.”

The most telling was the Mood 4 Eva scene in which young Simba (played by 7-year-old South African actor Folajomi Akinmurele) is napping and an Alice in Wonderland dream sequence or vision takes place. I saw one review that refers to Mood 4 Eva as an “ode to decadence.” I suppose that’s one way of looking at it.  Another way of looking at this scene is as an ideation of black power and spiritual and material fulfillment — if you can dream it you can build it.