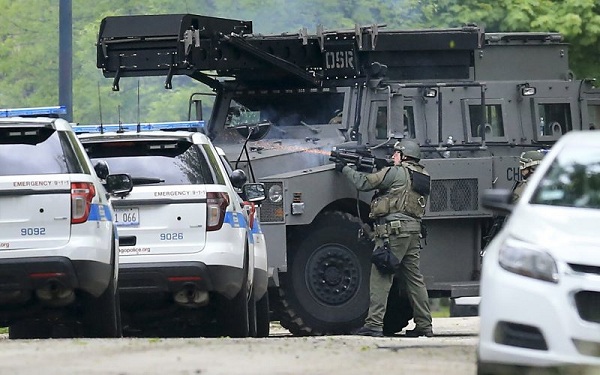 Ever since images of the police deploying armored vehicles against peaceful demonstrators in Ferguson, Missouri, hit the national airwaves in 2014, the Pentagon’s program for supplying “surplus” military equipment to local police departments has been a news item. It’s also gotten intermittent attention in Congress and the executive branch.

Since 1997, the Pentagon’s 1033 Program, as it’s called, has channeled to 8,000 separate law enforcement agencies more than $7.4 billion in surplus equipment, including Mine-Resistant Ambush Protected (MRAP) vehicles of the kind used on the battlefields of Iraq and Afghanistan, along with rifles, ammunition, grenade launchers, and night vision devices. As Brian Barrett has pointed out at Wired, “Local law enforcement responding to even nonviolent protests has often looked more like the U.S. Armed Forces.” Political scientist Ryan Welch coauthored a 2017 study suggesting, when it came to police departments equipped in such a fashion, “that officers with military hardware and mindsets will resort to violence more often and more quickly.”

William D. Hartung is the director of the Arms and Security Project at the Center for International Policy. He is the author of Prophets of War: Lockheed Martin and the Making of the Military-Industrial Complex.