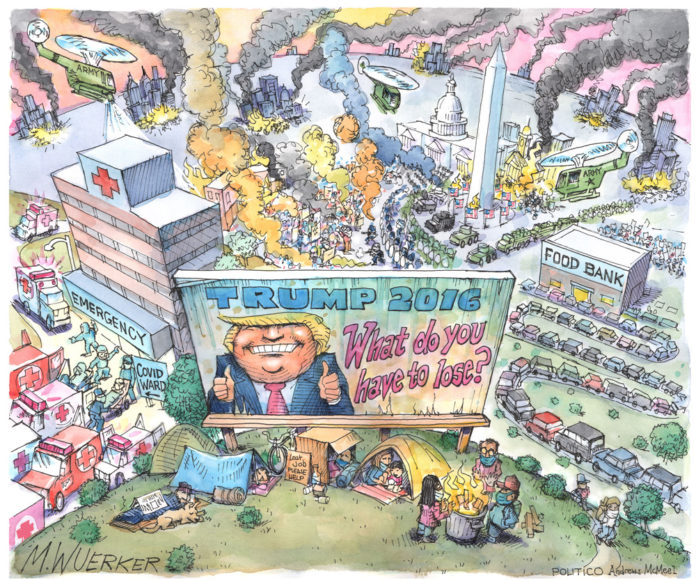 From listening to President Donald Trump’s hateful jeremiads against the US Postal Service, you’d think the constitutionally mandated function of the federal government was anti-American, socialist or perhaps even a communist enterprise. What he doesn’t say, or perhaps more likely doesn’t even know, is that our postal system predates the adoption of the United States Constitution itself. Along with falsely claiming “voter fraud” by mail-in ballots, this is just one more of his many delusional accusations — evidence  he is a clear and present danger to our Republic.

I was reminded recently by one very concerned congressional aid that there are only two businesses enumerated in the US Constitution and the Bill of Rights — the first is the Post Office and second, under freedom of the press are newspapers (read news media today).

His concern comes as Postmaster General Louis DeJoy, a Trump political appointee, has been disassembling the postal service as a means to constrict and obstruct mail-in voting or to otherwise implode what may be the most beloved part of the federal government — the mail system.

The term “austerity” has been used to conjure up a veneer of fiscal conservancy that slows the mail by cutting overtime hours to workers and dumping automated sorting equipment.

In response to one of the largest mail protests ever by American citizens, Postmaster DeJoy suspended his orders of removing mailboxes, slowing down deliveries and otherwise corrupting the mail service until after the Nov. 3 election. However, Congress is not satisfied with this reaction, nor should they be.

Rep. Alan Lowenthal, (D-47th District), says that he has never received so much mail in all his years in office.

“The post office is sacred to the American public,” this he says crosses party lines.  He cites that 1.2 billion medical prescriptions are delivered annually and 70% of all small businesses use the USPS. And indeed, so do most independent publications like this one who still use the mail to send hard copy subscriptions.

This of course brings me to complain about how poorly the mail service was before DeJoy went on his joy-ride only making things worse. Back in 2006, the Republican majority in Congress passed the Postal Accountability and Enhancement Act, which did nothing to “enhance” the mail service.

What it did was to obligate the USPS to prepay 75 years of pension obligations at approximately $5.5 billion per year — something no other public or private business has ever done. Clearly the effort to destabilize the postal system has been going on a long time in order to take it out of government control and into private hands —first by underfunding it, then by trying to bankrupt it with the 75-year pension prepayment. Now it’s done  by deconstructing many of the standard operations that we all enjoy.

The USPS dates back to the very beginning of our country and it was created by the Second Continental Congress. None other than Benjamin Franklin was appointed the postal system’s first postmaster general — you may recognize him as the face on the $100 bill. It was kind of his idea to create this service in 1775 that was formally adopted with the Constitution in 1792. So the idea that this is some kind of “radical” idea for our government to own the mail system is far fetched.

So in essence, the postal service is older than our government, more popular than our current president and more essential to both our lives and economy than Twitter or Facebook. It actually is a government granted monopoly on first class mail service that as of 1970, was transformed into an “independent agency.”

Whatever you may think about the declining service of your local post office, what you might like to imagine is what it would be like if it didn’t exist at all. Think of it in the same way you might think about public schools, fire departments or public transportation. Now is the moment that Congress needs to act to preserve this public asset from being destroyed by the most dangerous and corrupt president that our nation has ever seen.

Do not, however, think that this is more than another distraction or trick, like sending federal police into Portland, Ore. to enrage demonstrators and take the focus off of his disastrously poor handling of the coronavirus and the resulting economic fallout. The COVID-19 pandemic can’t be bamboozled or lied to. It can only be lied about. And the Liar-in-Chief has been doing that since the beginning, but 175,000 deaths is hard to explain away.