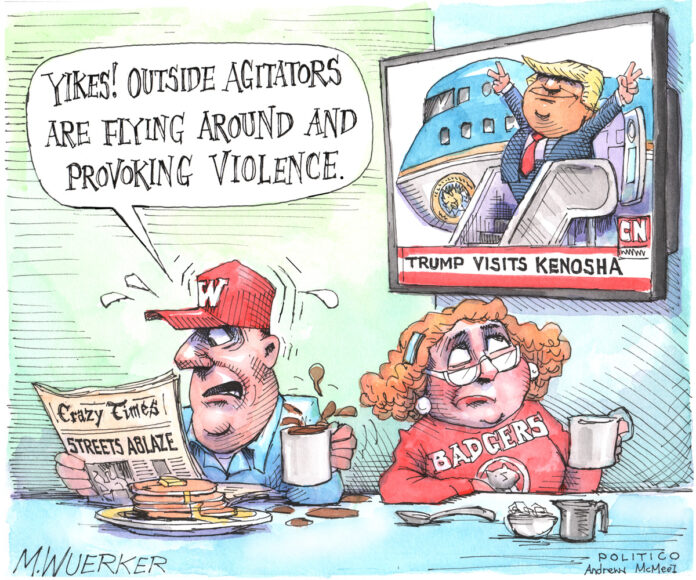 Shades of Nixon’s law and order while breaking and entering

The Republican National Convulsion was mostly impossible to witness, but what stood out so blatantly (and could not be ignored) was the Trumpster standing on the White House lawn, using federal property for express partisan purposes (a violation of the Hatch Act) moaning about law and order.  Such a hypocrite — he could be impeached for less. We haven’t witnessed such bald-faced lying to the American people since President Richard (Tricky Dick) Nixon exclaimed “I’m not a crook” and went on the law and order binge while his plumbers were breaking into the Democratic National Headquarters at the Watergate Hotel in D.C.

Back then, the crooks actually had to break into the opposition’s offices. They didn’t use the help of foreign governments to hack into and steal compromising documents. What we are seeing today, America has seen before. It’s like the sequel to a B movie drama. And as the reinvented and compromised GOP gets down to the final leg of a very ignoble four-year term and competes for reelection, the bigger the lies they will tell, and the more the true believers will chant Don-the-Con’s refranes.

I won’t reiterate the lies as they bleed through the walls of all the far right media outlets, seeping into the mainstream and social media that you use, no matter how many times you delete or mute them.

There is a new silent majority that is quietly praying that this will pass over them like one of the seven plagues of Egypt missing the believers of liberty and justice and only striking down those with pre-existing racism or attending a rally without a mask.  Perhaps herd immunity will somehow be attained before the entire republic becomes infected by Trumpian gaslighting of America.  I fear there will be no such luck.

Back in Nixon’s day, the silent majority ruse was the distraction against the millions demonstrating against the War in Vietnam who were watching the growing casualties in a war we never felt justified in winning. Then, as now, this passive set of citizens sat wide-eyed glued to their TV screens, mostly in shock and horror at the nightly news reports as the war flashed across television screens. Protests and riots ensued. These were the days when the young believed they could change America or the world for the better. These were the days of social justice reform, voting rights and the birth of women’s liberation and so much more. These were days of change and idealism and the subversive resistance to such change.  And for the last 50 years, we as a nation have struggled with the consequences of resisting change. Fox News calls it the “culture wars” and Rush Limbaugh and his fellow far right shock-jocks back it up with racial slurs and misogynistic slanders.

Today is clearly a repetition of Nixonian corruptions only, except it’s far worse. Trump is not going to leave the presidency without an overwhelming and convincing vote to evict him. Yet the legacy of the damage he has already done while in office will take years if not decades to repair, even when he loses!

In fact the Democrats should probably just use the slogan “Evict Trump” rather than trying to repel his ignorant tweets. It might inspire the thousands of renters who are now facing homelessness, job loss due to the COVID-19 pandemic and the economic fallout from it to actually vote for a change.

So, here we are once again five decades after driving one crook from the presidency having to do it all over again. Only this time he’s more blatantly racist. More delusional and self absorbed as he tries to promote himself as the only one who can “fix” America and stop the lawlessness and disorder brought about by the absence of any controlling authority-his.  Fixing is a double entendre here that shouldn’t be overlooked, which also means fixing a fight or an election. This is curious for one who insists that there will be voter fraud with mail in ballots. Is this something only he can fix?

Wait a minute. Isn’t Trump the one who shifted his responsibility to the state governors to deal with the pandemic? Was it not he who dismissed the coronavirus as something that would “magically disappear by April”? Then it got worse. Who was it that provided no leadership against the white supremacists in Charlottesville, Va., or in anywhere in America to address racial injustice?

Remind me of why is it that our nation is so divided again?

He’s now using law and order to distract you, the actual majority, silently quarantining from a distance in the dystopian new reality he has invented by pretending to bring bold leadership. Has he built a wall that isn’t built? Has he jailed immigrant children at the borders to protect us from the caravan hoards, deregulated environmental laws that have taken years to pass to protect our air and water?

The new silent majority is the mass of Americans whose opinions are not loud and public, but who together have enormous power. Some 70% of whom think universal healthcare is a good idea. They are the ones who actually wear a facemask and believe that the local public health officials are mostly right. They are the ones who have come to believe that diversity is strength, that tolerance is a civic virtue and that compassion for their fellow citizens is not a weakness.

There is a growing number who believe in the very American creed of liberty and justice for all is more than empty words spoken at patriotic ceremonies before a flag. This country only has one flag and it’s not the blue bars and stars used by the Confederacy to defend slavery. These are the ones who are coming to realize that the United States of America cannot stand if some are less equal than others and that no one is above the law — including Mr. Donald J. Trump.