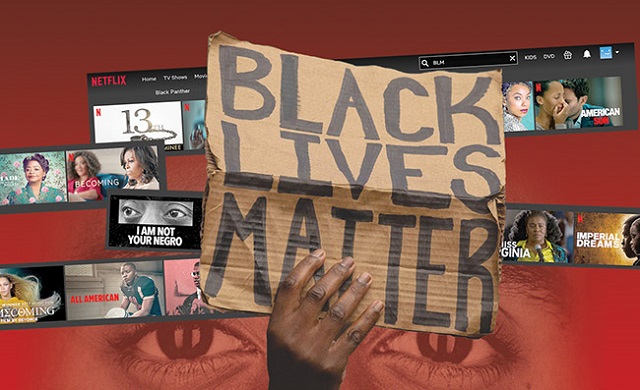 Marketing versus support: There is a difference

If there is anything COVID-19 has taught Americans, it’s that every day could be a Netflix night. That is until Americans get fed up with injustice, as was the case after the murder of George Floyd this past Memorial Day, when thousands of people across the country took to the streets to protest police brutality.

“Of all the indicators for anything that has to do with education, socioeconomics and politics, unfortunately, black folks are on the bottom,” said Audrena Redmond, a founding member of Black Lives Matter Long Beach and the program director for anti-racism and social justice with the California Faculty Association. “And so, one would think that means that there is something inherently wrong or that black people are degenerate and none of that is true. What is happening is the system is set up in a way that it’s doing exactly what it was always meant to do if you know American history.”

To be clear, police brutality is just the tip of the iceberg when it comes to racial inequity in the United States. Racism and injustice are continuing issues that encompass criminal justice reform, immigration, economic development, access to healthcare, voter suppression, environmental and human rights and education equity.

Beyond the protests of those most affected, movements such as Black Lives Matter have garnered the support of many allies who sympathize with their struggles.

Some businesses — and some educational institutions — have rebranded, supposedly realizing what for years have obviously been racist tools or names, such as the Aunt Jemima syrup. Yet, as I drive on the 710 Freeway and read electronic billboards that read “We stand with Black Lives Matter” or drive through the streets of Long Beach and observe the boarded-up store windows with signs that read “Black Lives Matter,” “#BLM” or “Justice for George Floyd,” I can’t help but wonder if the owners actually support the movement, are trying to cash in on the latest upsurge demanding social justice or if they were just just hoping those words would spare their stores from potential looting and damage.

“There’s this term that’s kind of gone out into the lexicon of ‘performative allyship,’ where you perform it, but you don’t necessarily interrogate your own racist ideas or you’re just trying to show that you’re not racist, but you’re not trying to undo racism,” said Dr. Donna Nicol, chairwoman of the Africana Studies Department at California State University Dominguez Hills. “I’m particularly interested in … the uses and abuses of performative allyship, where folks — particularly in this current moment — are using performance to demonstrate how concerned they are about Black Lives Matter and George Floyd and these issues, when they’ve been silent up to this point.”

Prior to her 15 years as an academic, Dr. Nicol had worked for an African-American-based advertising firm where she did graphic design and marketing research.

Nicol warns that companies are just as vulnerable to performative allyship as individuals are.

Case in point, Netflix recently began to label some of its films #BLM feature. While many viewers are content with this apparent show of support, others question whether that display is just a flawed marketing strategy targeting a group of already marginalized people for their dollars.

Several efforts were made via LinkedIn to reach out to Myles Worthington, the director of brand marketing and editorial at Netflix, as well as through Netflix’s media center, without any response.

In fairness, Netflix has pledged to donate $1.5 million to Ghetto Film School, Film Independent’s Project Involve, Firelight Media and Black Public Media, as well as give $1 million grants to three youth-oriented organizations: Know Your Rights Camp, the Posse Foundation and Black Girls Code. But most people would not readily know that, because its philanthropic endeavors are not prominently featured on its website.

But Netflix is not the only company that seems to be using performative allyship. On July 23, Major League Baseball garnered criticism from those opposed to the Black Lives Matter movement, as well as supporters of the movement who see the action as performative allyship. The logos of Major League Baseball and Black Lives Matter were redesigned so as to intertwine in a display on the pitcher’s mound at Nationals Park in Washington, D.C. Additionally, all players for the Washington Nationals and New York Yankees knelt for about 20 seconds before the national anthem, although they all stood for the song.

In June, Walmart, one of the largest corporate employers of a black workforce, announced its commitment to use $100 million in five years for a racial equity center. It also announced it would no longer place “multicultural hair care and beauty products” in locked cases. While this might be considered a step forward, it ignores the fact that the company compensates its workers with poverty wages, inadequate health insurance, insufficient health precautions in the midst of COVID-19, maintains a disproportionate number of black workers in low-paying and non-managerial positions and supports incendiary politicians who fuel racial divisions.

“If you are business and you are putting the hashtag ‘Black Lives Matter’ or ‘George Floyd’ on your boards, we love you, we appreciate you, but now need your mouth, money and your body where the words are,” Redmond said. “Those are actions.”

It’s not surprising that companies are seeking the black dollar during a time of heightened awareness. According to the Simon S. Selig Jr. Center for Economic Growth, which conducts research on economic, demographic and social issues, black buying power was $1.4 trillion in 2019. That’s about 47.8 million people in the United States with a buying power that is on par with many countries’ gross domestic products, outpacing spending nationally, Nielsen, an information, data and measurement firm, reports. And yet, even though the black buying power trend and over-indexing in spending continue to increase, companies’ investments in providing genuine advertisement for those communities have declined 5% between 2017 and 2018. “The problem is that the market does this kind of appeal to black people for their spending, but they’re not doing the advertising that will go toward black people or their hiring practices are questionable if you look behind these brands to see who’s in positions of power, who are key decision-makers, employee relations,” Nicol said. “How sincere are you about the black dollar? It’s almost predatory in terms of, ‘We are going to put out a Black Lives Matter statement.’ OK, do me a favor before you put out this statement, let me know how many black employees you have first.”

Many black consumers should take note and be more cautious about the companies they support.

“If you don’t like the way a company operates, leave,” Nicol said. “Don’t spend money there. There is nothing that requires you to spend money on a company that you don’t believe in. … If you feel so committed as to engage that company write letters or go onto their social media.

“We need to be a little bit more circumspect and speak out if you know a company is trying to use us and we don’t get to get something back in return.”

Redmond said she worries about pandering and the opportunity to try to be on the right side of history without doing the work. There is a fine line in advertising between reaching out to a community and being inclusive, and simply being insulting and insensitive to a group.

Nicol made a few suggestions about how companies might approach the black community:

• Include black people in advertising campaigns

• Improve the institutional culture within the company

• Companies should not be lazy and arrogant. They should make real attempts to find out about a culture they are trying to market to

• Make a concerted effort to change ideologies, not just branding

• Companies should promote their grants programs, social justice donations and participation and their advocacy for progressive laws and politics

“A lot of — particularly larger companies — like to put out these corporate responsibilities statements or they like to hire a diversity expert or someone to come in to be their diversity officer, but they don’t make a lot of substantive changes,” Nicol said.

There is no question that success of a civil rights movement necessitates allies, but allies must act in meaningful ways that aren’t just performative.

“The most marginalized should lead,” Redmond said. “The most marginalized voice should have a lot of weight, should have power, should lead. That has to be key. What we don’t [need] is saviors. We don’t need white folks trying to educate us about racism. We feel that; we live that; that’s not what we need. What we need from you is to be an ally. At the very least the ally is there to support you. … We need co-conspirators.”

It’s acknowledging that everyone has a collective responsibility. People need to be in trenches and check their privilege, Redmond said.

“A chain, no matter how big it is, is only as strong as its weakest link,” she said. “So, we have to focus on the weakest link. When that link is strong we are all strong.”