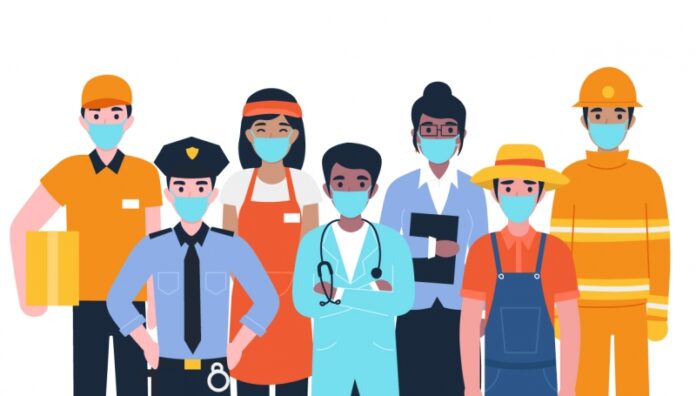 Praise for the “essential worker” as heroes is ubiquitous. You can’t change a channel, read a news feed, or peruse social media for any period of time without getting the message that they are America’s heroes. It is also not lost that it is the essential workers who have kept the economy running during the pandemic.

Yet six months in, many of these workers are now losing the bonuses and pay raises they were given as a substitute for hazard pay.

They are called heroes, but these workers are daily made to choose between their lives and their livelihoods. Health care workers are the most at risk as many fear retribution for speaking out about lack of PPE, exposure to the coronavirus or working conditions.

In the early months of this pandemic, I befriended a licensed nurse assistant in a California town on the U.S.-Mexico border. In this story, I’m identifying her by Virginia to maintain her anonymity for fear of losing her job.

Virginia, 43, spoke of regularly feeling mentally exhausted dealing with the high number of COVID-19 patients being received at her hospital and having to take melatonin to sleep after working overnight shifts.

Virginia is single, and she has no children. She’d just recently purchased a new home and her elderly mother, who has a few chronic health conditions, lives with her.

Getting geared up in personal protective equipment is a nightly ritual at her hospital. When she returns home, she immediately strips out of her clothes in the garage and takes a shower before greeting her mother.

Some nights she just feels like going home shortly after arriving to work.

“There are so many of them that have it and they don’t know ‘cause they are not being tested,” Virginia said.

I asked her how she keeps herself and her patients calm in this situation.

“You mean with this whole COVID thing going on?” she asked. “I’m actually scared to be honest. I have no choice. But I already made the decision that if our hospital won’t provide us with the proper PPE (personal protective equipment) … with this virus going on … I will refuse to work … and quit.”

I asked if her hospital was reaching that tipping point?

“Well, we are short on PPE,” she said.  Keep in mind, we had this conversation in April.

“We’re having to reuse our gowns and our masks,” Virginia said. “They just give us one set for the whole shift and they want us to reuse it. It’s ridiculous.”

Virginia’s family wants her to quit, fearing that she would contract COVID-19. The only thing keeping her there is that she has a mortgage and other outstanding debts to pay.

Going over our exchange of direct messages, I was reminded of just how hopeful we all were about the duration of this pandemic. Virginia, at the time, believed it would be months before COVID-19 went away or calmed down. Now there’s expert speculation that it could be years.

She explained that what scared her the most was getting COVID-19 and not knowing how her body will react to it.

“A lot of younger people are also dying and ending up intubated (inserting a tube into the trachea for ventilation) … a lot of them,” she continued.

Virginia was particularly worried knowing that people with preconditions were more susceptible to die from COVID-19. She has asthma. Virginia recounted the story of a nurse with asthma in New York who died from COVID-19. I asked if there were a support group within her union to help cope with the stress.

“We don’t have a union at my hospital,” she said. “When they wanted to start one, they fired all the nurses that were trying to start it … all 10 of them. Isn’t that awful?”

Interestingly, we don’t have to go as far as Calexico to find conditions such as these. I know of a licensed vocational nurse who is working on becoming a registered nurse. She noted that for nurses like her, who for all intents and purposes are treated as independent contractors, find themselves jumping from one care facility to another with varying levels of protective gear and work conditions that protect health care workers from COVID-19.

In this edition of Random Lengths News, we offer a look at the new normal from the perspective of local educators in the K through 12 system and tasked with the job of educating students online via Zoom.

Back when the Donald Trump administration was pressuring school districts to reopen, the Los Angeles Unified School District replied that schools will reopen when the experts say it is safe to open. Meanwhile, United Teachers Los Angeles called for campuses to remain closed and for online learning to continue when classes start again. Period.

In this edition, we also feature the story of Rosemberg Jones-Pavon, a local registered nurse who is on the frontlines in the battle against COVID-19. Jones-Pavon spoke on the responsibility he bears and how that responsibility has impacted his family.

The term “hero” is defined as a person who is admired or idealized for courage, outstanding achievements, or noble qualities. But it’s also defined by a person, who at great sacrifice (often making the ultimate sacrifice) exhibits admired qualities of courage and outstanding achievements. What I hope is not forgotten is that essential workers are being called heroes to jumpstart a faltering economy until it is no longer convenient to do so.

Remember the great fanfare with which grocery store workers were met with a bump in pay and $200 bonuses? Now, retailers across the country have quietly stopped providing their “heroic”  workers those pay raises they had dispensed at the start of the pandemic, despite surging virus numbers in many states.

The companies’ rationale for cutting back on this so-called hero pay is that the panic-buying that flooded stores during the early weeks of the crisis has waned.

Amazon, Kroger and Albertsons have also ended pandemic hourly pay raises, though some of them continue to give out bonuses. ShopRite said it planned to end its $2-an-hour raise early next month.

The politicization of mask-wearing hasn’t made working conditions any better. Store employees now risk violent confrontations when they remind customers and colleagues alike to cover their faces.

If nothing else, this pandemic has exposed the lie on how much America values its heroes, let alone essential workers. It also exposes how much everyone is interdependent upon the average working class heroes from the supermarket to the schools, hospitals to the post office.

Here are a few of their stories: