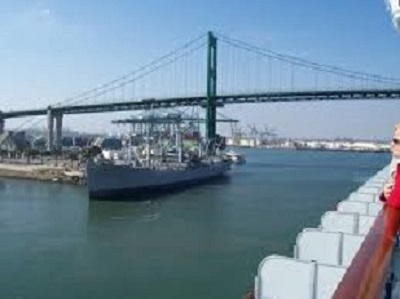 SAN PEDRO – The Port of Los Angeles processed 961,833 Twenty-Foot Equivalent Units (TEUs) in August, the first monthly cargo increase in a year. The 12% gain in cargo was driven by imports, which eclipsed 500,000 TEUs for the first time.

The overall monthly volumes were the strongest ever at the Port of Los Angeles. Year to date, cargo has decreased 11.7% compared to 2019.

“With our recently released ‘Signal’ data powered by the Port Optimizer™, we are working with supply chain partners to improve cargo fluidity and advanced visibility to track, plan and prepare for cargo,” Seroka said.

The Signal provides a three-week look at cargo coming into Los Angeles and is updated daily here.

There was one canceled sailing in August, with none scheduled for September. The Port had 89 vessel calls in August, including eight megaships (container ships capable of handling more than 13,000 TEUs). The 17,000-TEU-capacity APL Merlion handled nearly 29,600 TEUs during its visit in August, holding the second highest all-time record for TEUs handled in a single ship visit.